Template:Character Cubot is a counterpart of Orbot that first appeared in Sonic Colors. He was created by both Dr. Eggman and Orbot. Throughout the game, he has a failure in his voice chip varying from his own voice and accent, from a cowboy accent, to a pirate accent, and finally a Brooklyn mobster accent.

In the beginning of Sonic Colors, he is seen capturing two Wisps along with Orbot with a net. However they fail to capture both of them because Sonic had saved the two. He is cursed with a faulty voice chip. At the start he had a Texas "cowboy-like" accent, until Eggman was fed up with the accent and sent Orbot to change it in his lab. When Orbot was done, it seems that unfortunately it turned out to be the wrong chip--Cubot now had a "pirate-like" accent and he used a lot of pirate slang. This accent made Eggman even angrier at the robot. When Eggman asked Orbot if he was sure Cubot doesn't normally speak in "pirate", Orbot tells him to look at the brighter side as Cubot seems to act more "exotic" in his new voice chip.

Cubot is seen again in Eggman's lab, this time with a Brooklyn mobster accent. He was complaining that Dr. Eggman has never stopped Sonic from foiling his plans. Orbot felt proud of him for being more "attentive" and playfully slapped his back and, somehow, his voice turned into his original voice. While Cubot was celebrating cheerfully on having his voice back, Eggman had fled.

He is then seen in the last cutscene of the game. When Orbot tells Eggman that although they had lost, the good news is that Cubot got his voice back. Cubot then pops out and becomes excited about his new voice, saying that he just wants to keep talking and talking. Cubot continuously talks excitedly until the scene fades out.

Mario and Sonic at the London 2012 Olympic Games

Cubot and Orbot make a cameo appearance in Mario and Sonic at the London 2012 Olympic Games, during London Party mode. Sometimes, when placing a sticker on a question mark spot, both robots will appear and copy an existing sticker on that page, placing it in a random spot that isn't a question mark.

When speaking to Metal Sonic in London, the two robots will appear above his head and talk to the player instead, even though Metal Sonic is capable of speaking in most other games.

Also, Orbot and Cubot have their own bonus game, 'Orbot And Cubot Tag', where they will try to trap the players in metal cages.

Orbot along with Cubot make small cameo in Sonic Generations. During their time stranded in outer space, when Eggman came upon the Time Eater's power, the Doctor quickly fled to prepare his next plan and left both Orbot and Cubot behind him without a second thought. It is unknown what happened to them after that.

Cubot isn't very bright, and is considered annoying to Dr. Eggman and Orbot. The official Sonic Colors instruction booklet explains him by saying: He likes Dr. Eggman, but he is lazy and tries to get out of doing any work.

Cubot and Orbot appear in the Sonic the Hedgehog comic series as well as Sonic Universe. They were activated around the same time as Snively's betrayal and since then have assumed a similar role as in the game, and to the characters they were based on; as Eggman's punching bags and personal assistants. In keeping with his Sonic Colors appearance, Cubot's voice is written with a different accent in every issue. 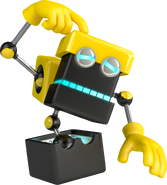 Retrieved from "https://sonic.fandom.com/wiki/Cubot?oldid=862490"
Community content is available under CC-BY-SA unless otherwise noted.