The Cube Wispon, from Sonic Forces.

A hammer that uses the power of a Blue Wisp.

Turn enemies into cubes. Smash the cubes to receive Rings.

The Cube Wispon,[1] also referred to as the Cube Hammer,[2] is an object that appears in the Sonic the Hedgehog series. It is a Wispon that is themed after the Blue Wisp. The Cube Wispon can be used by Avatar, allowing the character to slam the hammer down on the ground, transforming nearby Badniks into Blue Blocks that, upon being destroyed, can transform into Blue Rings.

Modeled after the Blue Wisp, the Cube Wispon is a Wispon in the shape of a hammer. It has a cube-shaped blue head with a gray metal plate covering the front and top, and it possesses a hexagon-shaped yellow face. Also, on the head's sides it has three white circles aligned horizontally along the middle. Also, on the back of its head, it has yellow groves. Lastly, a short black handle with a yellow pommel extends from the bottom of the head.

Like when using an actual Color Power though, the Cube Wispon is activated by the Blue Wisps' cooperation, meaning it cannot be used by users that the Blue Wisps do not like.[3]

The Cube Wispon allows the user to slam the hammer down on the ground, transforming nearby enemies into Blue Blocks. The enemies who are now Blue Blocks will then disintegrate into Blue Rings when touched or attacked again. However, the Cube Hammer can only transform enemies that touch the ground, meaning airborne enemies like Buzz Bombers are immune to its ability. Activate the Cube Wispon in the air will cause the user to spin fast enough to generate a whirlwind strong enough to destroy enemies on contact before activating as normal when hitting the ground.

The basic Cube Wispon is unlocked by defeating Infinite during his boss fight in Mystic Jungle. By advancing through the game, the player can unlock different variants of the Cube Wispon. These variants all have the same basic functions, but offer additional skills to the player when equipped:

In the Sonic the Hedgehog comic series and its spin-offs published by IDW Publishing, the Cube Wispon is a Wispon tool from Sonic's world. 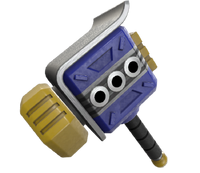 HUD icon for the Cube Wispon.