Crystal Sonic is a transformation that appears in the Sonic the Hedgehog comic series and its spin-offs published by Archie Comics. It is a reformed state of Metal Sonic, created by the Naugus Twins's crystalmancy.

Overall, Crystal Sonic looks nearly identical to his base form, except that every part of his blue armor has been covered by light blue, jagged crystals.

Having caught Metal Sonic after foiling Dr. Eggman's attempt to stop their invasion of Eggman Land, the Naugus Twins turned Metal Sonic into Crystal Sonic with their magic after Walter had the idea of making the robot work for them.[1][2] In his crystalized state, Crystal Sonic's programming became susceptible to the twins' commands. Crystal Sonic was soon after summoned by Wendy to battle Eggman and his assembled Egg Bosses when they confronted the Naugus Twins.[2]

As the fight got overturned against the Naugus Twins, Eggman prepared to fire at Walter Naugus with his Hard-Light Armor. Unfortunately, Crystal Sonic got in the way of Eggman's shot. Taking the blast meant for Walter, Crystal Sonic was purged of the twins' Crystalmancy and reverted back to normal.[3]

Despite his change in composition, Crystal Sonic retains a number of his base form's abilities, including high-speed flight, enhanced strength and durability, and Spin Attack capabilities.[2] 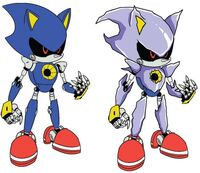 Metal Sonic compared to Crystal Sonic, by Vincent Lovallo.
Add a photo to this gallery

Transformations
Retrieved from "https://sonic.fandom.com/wiki/Crystal_Sonic?oldid=2364396"
Community content is available under CC-BY-SA unless otherwise noted.