Ice crystals, snow banks, slippery tracks and freezing waters comprise this winter wonderland. If the blizzards don't slow your racer down, the brittle ice barriers will. Make sure to hop in the bobsled and barrel down the track at death-defying speeds.

Crystal Mountain Zone is the fourth Zone in Sonic Rivals. It is a wide mountain range covered in layers of thick ice with several traps and is located on Onyx Island, a future version of Angel Island brought to the present by Eggman Nega.

The layout of Crystal Mountain Zone features several snowy peaks with frozen bluffs cutting through wide rock chasms, complete with icy rivers. The course is completely covered with ice and stands up against a pink-colored, cloudy sky. The course is decorated with many large, multicolored crystals and ice sculptures, along with bare trees, frozen grottoes below the surface and hanging icicles. There are also cryogenic geysers in the blizzard outside.

Passing through Crystal Mountain Zone involves much vertical maneuvering and jumping out of ice caves on ladders or springs. It also involves breaking through ice walls, similar to those found in Holoska. Also, like in the Colosseum Highway Zone and in Holoska, this stages features a bobsled which can be used to proceed through the course until a certain point.

This Stage also features many traps and obstacles, all of which are winter-themed. When passing through the frozen grottoes, the player can be damaged by spiky ice sculptures, and when hitting certain trees, it can cause a block of ice to fall down which will freeze the player's rival. This level also has a pit where the opponents can push a boulder over any rival who falls into it.

After beating Metal Sonic, Sonic wonders what "Dr. Eggman" (Eggman Nega in disguise) plans to do next, but then runs into Silver, who is wondering how "Dr. Eggman" learned about and obtained the card-forming camera. Silver is surprised to see Sonic catch up to him, and Sonic claims he has figured out the doctor's next move, but he will only tell Silver if they have a race. Not willing to let this chance pass, Silver accepts.

As the pair reaches "Dr. Eggman", Sonic demands the card containing Tails from him. However, as "Dr. Eggman" remarks on how stopping Sonic now would mean he would not stop him in the future, Silver finally figures out that the "Dr. Eggman" they had been chasing is actually Eggman Nega, as Eggman Nega would never lose his camera. The doctor then attacks them in the Egg Lynx.

After besting Metal Sonic, Knuckles begins to ponder on what "Dr. Eggman" meant about Onyx Island being Angel Island, but cannot make sense of it. Soon after, he runs into Shadow, who decides to go after "Dr. Eggman" to find out the secret Rouge was about to tell about him before she was turned into a card. Knuckles asks Shadow if he had found "Dr. Eggman", and Shadow boasts that he is not as clueless as Knuckles regarding the doctor's location. Angered by this, Knuckles races Shadow to "Dr. Eggman's" location.

The pair eventually chases down "Dr. Eggman". Knuckles asks the doctor what he meant by Onyx Island being Angel Island. He answers by saying that Onyx Island is Angel Island in the future, but Knuckles does not understand it. Meanwhile, Shadow demands to know the doctor's secret and "Dr. Eggman" reveals it by showing a card containing the real Dr. Eggman. The doctor then proceeds to attack them in the Egg Lynx. 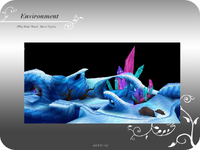