Sonic News Network
Register
Don't have an account?
Sign In
Advertisement
in: Articles in need of expanding, Shadow the Hedgehog stages, Castles,
and 2 more

Shadow in the Cryptic Castle, from Shadow the Hedgehog.

What's wrong, Shadow? Does my castle scare you?

Cryptic Castle is one of the third Stages in Shadow the Hedgehog. It is reached by completing the Dark mission of either Glyphic Canyon or Digital Circuit.

In the cutscene before the level, the President of the United Federation receives a call telling him about a data attack on the government mainframe - one perpetrated by Shadow himself if the player has completed Digital Circuit. Shadow teleports from/is teleported onto a large computer-like object where Shadow catches a glimpse of Dr. Eggman. Wondering if the doctor is the right person to interrogate about his origins, Shadow races off to follow the doctor. Shadow immediately runs into Amy Rose, who reports that Cream and Cheese have become lost somewhere in the castle. Finding the rabbit and her Chao, who have both somehow managed to get themselves stuck behind false walls, serves as the Hero mission. Alternatively, Shadow can acquiesce to the demands of Eggman's Drone and light five giant lanterns, which are in some unexplained way a part of the Doctor's defense strategy. The player can choose to chase Eggman, help Amy find Cream and Cheese, or help Eggman fend off the Black Arms.

Regardless as to which path Shadow chooses, he and Amy exit the stage to find the grey Chaos Emerald abandoned on one of the battlements. The black hedgehog picks it up, only to be waylaid by Eggman in person, riding his newest killing machine, the Egg Breaker. While Shadow protests that he has no quarrel with the Doctor, Eggman isn't about to let a Chaos Emerald get snatched right from under his nose and launches into battle with Shadow.

The following weapons can be found in Cryptic Castle:

Behind the Secret Door is a shortcut through the Stage and a Magnetic Barrier.

Shooting Chao or Cream will boost the dark gauge.

Cream is behind a cracked wall on the left side of a room after the second balloon ride. Cheese is in a hidden room behind the room full of other Chao.

Cryptic Castle's Expert Mode will have the player notice that the first balloon is gone, but by defeating the Egg Pawn a skull spring balloon will appear. Use that spring to bounce up to the top portion, and grind down the rail. At one point, there is a cage that must be opened by talking to Cream. Later, there is a fan that requires interacting with Cheese (now mixed in amongst the other Chao, who have all moved to the fan room) to activate. After the fifth checkpoint, get on the moving platforms, bounce off of the Black Hawk and then use the Light Dash to make it across to the other side.

The boss of Cryptic Castle is the Egg Breaker, one of Eggman's machines. The guide for this battle is Amy.

During this boss battle, the Egg Breaker will attempt to smash the player with the massive mace that is attached to its right arm. It will also sometimes spin, swinging its spiked ball in the process, which will make it invulnerable to all attacks. While Homing Attacks do damage this boss, shooting at it with a gun will bring it down faster. 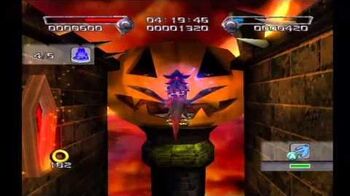 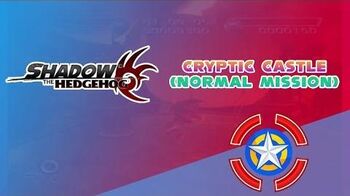 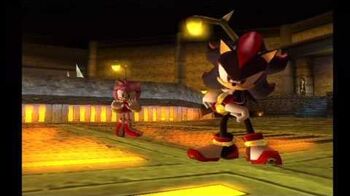 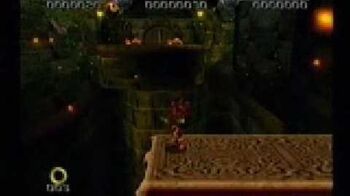