Tougher they are, the harder they fall.

The Crusher Brute[1] is an enemy that appears in the Sonic Boom series. It is a mass-produced model of Destruction Troops created by Lyric the Last Ancient which is a massive powerhouse in terms of physical strength.

The Crusher Brutes are tall and massive blue robots with black joints. They have a bulky and broad upper torso with two green-glowing cylinders on their back, a thin black waist, a cup-shaped pelvis and three black legs covered in blue armor. They also have a left forearm with three black claws, a blue mace with black spikes for a right hand, and a red eye connected to their chest by a thin neck. Their eye has a green sclera, a slit-like pupil and armored eyelids with an adjustable horn on top.

The Crusher Brutes are a rare type of enemy that serve as small minibosses. They are encountered in Lyric's Weapon Facility, Cliff's Excavation Site, Ocean Purification Plant, Creeper Gorge, Sky Citadel and Lyric's Lair. In gameplay, the Crusher Brutes attack with their maces, either by swinging them around or smacking them into the ground to create a shockwave in front of them. Additionally, they can make themselves invulnerable to damage and unfazed by attacks for a few seconds by surrounding themselves in a blue aura. They use that ability when they will launch a powerful attack.

to instantly destroy them, during which they will spin around while leaking oil before blowing up. When defeated, the Crusher Brutes release six Rings and a varying amount of Robot Scrap.

After Team Sonic defeated Lyric, all the Crusher Brutes were subsequently scrapped.

Basically, the Crusher Brutes are mindless and silent drones unwaveringly loyal to Lyric the Last Ancient, having been programmed to obey his every command.[2] Their loyalty is only superficial however, as the Crusher Brutes are just soulless machines adhering to their programing, meaning their allegiance can easily shift when someone else takes control of them.

Tougher than the run-of-the-mill Destruction Trooper, the Crusher Brutes are true juggernauts in terms of physical strength and durability, capable of creating small shockwaves by hitting the ground and enduring extensive amounts of damage. For armaments, their right arm is equipped with a mace which they can use with terrifying efficiently in close combat. They can also temporarily cloak their entire bodies in a blue force field, making them invulnerable to harm. 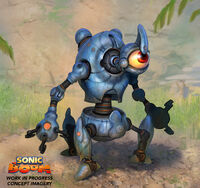