The only Rings are the ones Cream drops for you. Get to the goal in time.

I'll help you with the Rings, Mr. Sonic!

Cream: Helping Hand is the first Challenge Act of City Escape Act 2 in the console/PC version of Sonic Generations. It is unlocked after clearing every Stage in the Dreamcast era and is playable only as Modern Sonic.

This Act takes place in a heavily modified version of City Escape Act 2, filled with additional enemies, hazards, and barriers blocking the player's path forward. In addition, they are only given one Ring at the beginning of the Act, requiring Cream the Rabbit's aid to obtain any more.

The Act is made to be almost completely barren of Rings. As such, the player must call on Cream and her multiple Chao in order to receive rings from them.

The Act begins in the boarding area as normal, which has Jump Ramps placed at various locations. However, the only way to refill the Boost Gauge in this Act is from the rings Cream's Chao grant the player, each of which will replenish the Gauge by about 50%. The player will then continue through the Act much like normal, avoiding additional enemies and obstacles. Once they reach the large open area just before where Sonic runs down the building, the player must defeat three enemies and activate the switches they guard in order to deactivate the barriers behind them. After running down the building, the player will hit a Spring and be launched straight into the Goal Ring. 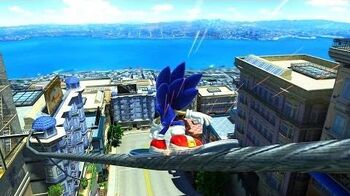