For the stage in Shadow the Hedgehog, see Space Gadget.

Sonic in Crazy Gadget, from the 2012 remaster of Sonic Adventure 2.

In and around the Space Colony ARK.

Crazy Gadget is the fifteenth stage in the Hero story of Sonic Adventure 2 and Sonic Adventure 2: Battle, and is the penultimate level both overall and playable as Sonic the Hedgehog. The stage takes place in outer space around the Space Colony ARK.

Sonic had arrived in the main computer room aboard the Space Colony ARK to fulfill his part of the mission of stopping Dr. Eggman's plan to dominate the world. Suddenly, over Sonic's radio, Tails warns that Amy has been captured by Dr. Eggman. Tails begins to cut out and Sonic only hears part of the message, but Eggman makes an announcement that he has in fact captured Amy which prompts Sonic to run off to save her.

Located in various places are Gravity Control Switches. By utilizing these Sonic can get past the numerous obstacles that come his way. There are also Rails on the ceiling and different "colored blocks" that float in space. Using the Gravity Control Switches, the player will be able to navigate these blocks. Additionally, the stage is filled with Artificial Chaos and Shield Hunters, making the progression much harder if the player has not obtained the Ancient Light.

An obstacle unique to this stage are green walls of energy, which can disarmed by firing a rocket into it. They can be found before the final point marker and guarding the Goal Ring. These obstacles cause an instant kill, regardless of Rings or shield -based power-ups.

This mission is surprisingly easy if the player is able to get past the Artificial Chaos. The best approach is to line Sonic up slightly to its left or right, Spin Dash toward it from a distance, then jump up and perform a Homing Attack just after it is possible to go by it.

When the player reaches the red platform out in space, instead of proceeding forward, they should hit the Gravity Control Switch on the left. Doing so places the player on top of the purple platform where the Ancient Ruin is, toward the screen and on the right. They must play the Mystic Melody to make a row of Rings appear, then Light Speed Dash across them and push forward on the Control Stick to reach the top of the red platform where the lost Chao waits.

The player should avoid attacking any unnecessary enemies and straying for any Rings. They must be going full-tilt almost constantly to reach the Goal Ring in less than five minutes. Fortunately, there is one shortcut.

The player should first get to the room with two doors after crossing the bottomless pit via the Light Speed Dash. From there, there is a red beam with rotating iron balls between it and Sonic, and another door below it. The player must jump over the iron balls and perform a Homing Attack while in midair to defeat the nearby enemy, then go through the door ahead that opens. As a second door opens on the opposite side, they should jump off and perform another Homing Attack to land near the Rings below it.

There are some changes that have been made in Hard mode:

The Level Up Item in Crazy Gadget is the Flame Ring, which allows Sonic to break Steel Containers with the Fire Somersault. This Level Up Item is required to beat this stage.

In Hard mode, Big is located on the underside the blue platform near the end of the stage.

In the Wii version of Mario & Sonic at the London 2012 Olympic Games, Crazy Gadget is featured as the setting of the Dream Trampoline event.

In the Sonic X anime series, Crazy Gadget is a section of the Space Colony ARK. 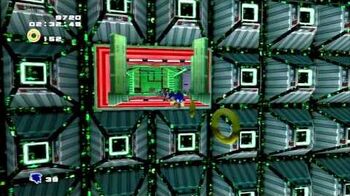 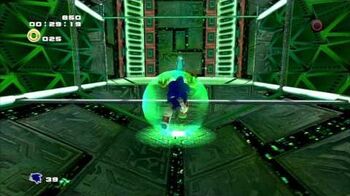 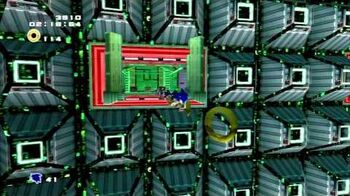 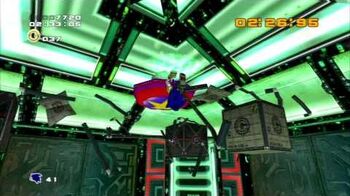 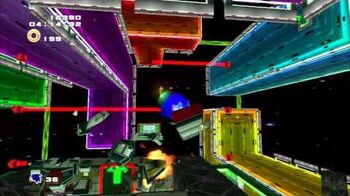