For other uses, see Crawlton (disambiguation).

A Crawlton, from the Wii U version of Sonic Lost World.

It hides in dark crevices, lashing out when Sonic comes near.

The Crawlton[1] (ザキーン[2], Zakin?) is an enemy that appears in the Sonic the Hedgehog series. It is a mass-produced, centipede-based Badnik model created by Dr. Eggman that hides underground to rapidly ambush its targets from unexpected places.

Crawltons seem to be successors of the Caterkillers, as they share a similar design. The first Crawltons consisted of eight round segments, including their heads. They were mostly dark blue with a yellow underbelly, and each body segment had a yellow spike on both sides. Their heads had a pair of black eyes, a pointy antenna and screw on each side, and sharp mandibles with a mouth between them. They also a grey plate on each side of their head which connected with their antennae.

In all versions of Sonic Lost World, Crawltons have purple armor and their bodies consist of many more segments. They also have cyan eyes instead of black and the grey plates on the sides of their heads are replaced with yellow caps.

The first appearance of this Badnik was in Sonic the Hedgehog 2 (16-bit), where it served as an enemy. This time around, this Badnik is referred to as Crawlton[1] (ザキーン[2], Zakin?). In this game, the player encounters them in Mystic Cave Zone.

In gameplay, the Crawltons hide within the walls and wait until the playable character comes close. When that happens, they attack quickly by extending their heads towards the playable character, causing damage upon touch. However, the Crawltons can only extend their heads a limited distance. Because of their attack method, Crawltons can easily ambush the player. Before they attack however, their body parts can be spotted inside the walls, allowing the player to predict when they will strike. Otherwise, the player can avoid them by just running past the Crawltons before they attack. To defeat a Crawlton, the player must use the Spin Jump on its head after it reveals itself, as its spikes will ensure the player will take damage should they attack anywhere else. Also, upon their destruction, they release an Animal.

In the Wii U version, PC version and Nintendo 3DS version of Sonic Lost World, the Crawltons returned as enemies. During the games' events, all the Badniks, the Crawltons included, got hijacked by the Deadly Six.

In the Wii U/PC version of the game, the Crawltons appear in Desert Ruins Zone 1 and Tropical Coast Zone 2, where they serve as normal enemies, and will most of the time attack the player in groups. In gameplay, they burrow across the sands with their heads above the surface and when the playable characters gets close to them, they will pop out the sand in a swift motion to damage the playable characters. Additionally, the Crawltons have a noticeably longer attack range than in Sonic the Hedgehog 2 (16-bit).

In the Nintendo 3DS version of the game, Crawltons appear in Frozen Factory Zone 1 and 3. In gameplay, they are larger enemies that can take multiple hits before being defeated. These Crawltons must be destroyed in order for the player to progress through a Zone, similar to Sandworms. In battle, they hide in a shadow on the ground from where they will pop out of to attack the player, for then to retract back into and repeat the pattern. To defeat this Crawlton, stun it with a Somersault and then attack the glowing weak spot on it with the Homing Attack three times (or less with a charged-up Focused Homing Attack). Before the last hit, the Crawltons will overheat and start swinging their body swing around.

The Crawltons are efficient burrowers that can swiftly dig through sand. They also possess quite flexible bodies that lets them launch effective surprise attacks over long distances, and a lethal bite attack.

Sonic the Hedgehog: The Movie

In Sonic the Hedgehog: The Movie, the Crawlton are a brand of robots created by Dr. Robotnik that patrol the Land of Darkness. Sonic and Tails encountered one on their road to Robotropolis.

This Crawlton was longer than its game counterpart and looked similar to Caterkiller. In addition, the Crawlton was able to fly, like the Catakiller, Jr..

In the Sonic the Comic series published by Fleetway Editions, the Crawltons are a part of Dr. Robotnik's Badnik army. Depending on the artist, the Crawltons' design would be altered slightly various times. They were sort of recurring Badnik types early on in the comics, but appeared more scarcely as time went on.

In the Sonic the Hedgehog comic series and its spin-offs published by IDW Publishing, Crawltons form a part of Dr. Eggman's Badnik army. Their past is virtually identical to their game counterparts', up until after the events of Sonic Forces. 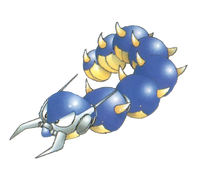 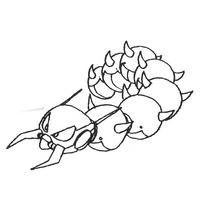