"Cracking Knuckles" is the fifth episode in the anime series, Sonic X. It first aired in Japan and the United States on 4 May and 4 October 2003, respectively.

The episode begins at night at an unnamed street, where Knuckles the Echidna is sighing and feeling saddened about being away from the Master Emerald after looking at a newspaper featuring Sonic. Suddenly, Dr. Eggman approaches him and goes on his knees (and grabbing onto Knuckles' hands) begging for Knuckles' help. He tells Knuckles that Chaos Control can send them back to their world if they have all the Chaos Emeralds. A flashback of Sonic breaking into Dr. Eggman's fortress is shown from episode 1 while Eggman persuaded that Sonic intended to use the Chaos Emeralds to travel through time and space.

Knuckles mumbles to himself that it was Sonic's doing. Eggman remarks that he simply wants to live his life quietly and peacefully on his home world. He adds that Sonic will not believe him and that the hedgehog does not wish to go back; Sonic also snatched the Chaos Emerald from the doctor so that he could not use them to reverse Chaos Control's effects. He claims that all Sonic is doing is playing around in the new world, considering it is better than the world he, his friends and Eggman come from, angering Knuckles even more. When Eggman thought that Knuckles is supposed to be buddies with Sonic, Knuckles quickly denies it and vows that he will settle this issue with Sonic once and for all to a battle to the bitter end as well as taking the Chaos Emerald. Eggman smirks in response.

The next day, Chris and Tails are admiring the Chaos Emerald in Chuck's lab. However, Ella tells them that she is coming up which prompts Chris to tell Tails to hide. Finding nowhere, Tails quickly slumps on a beanbag and pretends to be a stuffed animal toy. Ella sees it and says that it looks cute before Tails' eyes move to greet hers. She gets surprised but Chris snatches Tails and runs off with him before she could respond. He, Tails and Chuck run out to the yard claiming that their situation back there was close. The commotion wakes Sonic up from the nap he is taking on the balcony. Chris then bumps into Mr. Tanaka who quickly asks him what he is doing. Chris awkwardly replies that they are playing around with the stuffed-animal toy. Chuck is about to follow when Tanaka snapped that since Chuck is taking a break from his studies that it would be the right time to go to the swimming club. Chuck says he does not wish to but Tanaka pushes him off saying that Sundays should be regarded as holidays and that he needs a break.

Chris and Tails watch right before Amy runs into both of them unannounced. Tails falls off of Chris' back and Chris is startled. He turns and scolds Amy that she should not be running outside. Amy however informs them about another Chaos Emerald sighting in a TV report where at around Silver Valley, there has been confirmation of energy spikes similar to the ones that happened the day before. Tails assumes that these energy spikes are emitted by a Chaos Emerald while Chris notes that Silver Valley is not far away and then they all proceed to leave the house. Amy stops by Sonic and asks him if he would like to come to Silver Valley for a picnic. Sonic remarks he has already visited Silver Valley (without Amy), causing her to be mad. Chris says they cannot go anywhere without being driven but Tails suggests his own idea. The next scene shows them all on a train with Tails and Amy acting as two stuffed-animal toys leaning on Chris' shoulders. The public stares at him looking confused but they are ultimately not found out. Even when Amy kicks a little girl into the side of the doorway for pulling on her ear, the distraction caused by the girl's crying swayed the public's attention away from the heroes. Meanwhile, Sonic is delivered a message in a form of a television from Bokkun which recorded Knuckles' message: he tells Sonic that he is ready to settle things with him at Silver Valley. Sonic has a mixed reaction to this before the message explodes on his foot. When he is covered in soot, Sonic gets angry and accepts Knuckles' challenge.

At Silver Valley, Chris, Amy and Tails have decided to go through with their picnic after all. Tails remarks that they do not have any clues as to where the Chaos Emerald could be and that they should look around. Right before they begin though, a large purple robot known as E-47 Pumpty, surfaces from the lake in front of them. It quickly scoops the three of them up and traps them inside of itself. Eggman flies down on his Egg Mobile and reveals himself to them, saying that the energy that was being emitted was from one of his robots and not a Chaos Emerald. Tails makes a remark about humans always jumping to conclusions and Amy tries to break free with her Piko Piko Hammer but the glass remained intact. Eggman tells them that he needs them in case the doctor's plan of defeating Sonic fails. When Amy points out that Sonic will not be coming, he points to a cliff where Knuckles waits. Just then, Sonic finally arrives in front of him.

Knuckles angrily tells him that he is late. Sonic responds, nonchalantly that his face is unwelcoming. He goes on a little talk about how nice the weather is and how good the flowers smell, which only gets Knuckles angrier. He tells Sonic that they are going to settle things. Sonic chuckles and says Knuckles does not want to fight him. Knuckles simply demands Sonic to give the Chaos Emerald back. Sonic looks a bit surprised for a second before quickly reverting back to his smug style and teases him. This sets Knuckles off and the two have a small stand out before Knuckles charges and hits at him with his fists. Sonic easily dodges back from them and looks annoyed.

Knuckles continues his assault with Sonic dodging and kicking back at him. More punches eventually lead them to the forest where Sonic proceeds to run up a cliff from there and onto a tree. He makes a comment about the great view right before Knuckles grabs the tree and tosses him away. Sonic lands and runs off to escape numerous other trees that are being punched down by Knuckles. All of them miss while Sonic taunts which prompts Knuckles to go on an even wilder assault. Sonic eventually flips back over to Knuckles and spins into a saw-like shape in order to attack him. He hits and they land in the water. Sonic freaks out when he realizes he is in water only to see Knuckles' annoyed face and realize that he is in a shallow puddle (which he calls the "kiddie pool"). The two continue their fight with Eggman happily rooting for Knuckles. Amy looks on and realizes easily that Knuckles is being deceived. Tails, after all this time, managed to break into the robot's mainframe in order to figure out how to disable the robot. However, Amy is unwilling to wait and raises her hammer up to the wiring. Despite Tails and Chris' protests, Amy slams her hammer into the machine. The small mechanism sparks and explodes with them all inside. Sonic overhears the explosion and finally looks over to see Eggman cheering for Knuckles.

Sonic runs over there with Knuckles yelling back at him that they were not finished. Sonic ignores it and rams through E-47's legs causing it to fall backward. The glass breaks and Tails, Amy, and Chris are almost free. Eggman then proceeds to yell at Sonic about the destruction of his robot, as well. He tells E-47 to get up and take them out. It acknowledges and starts to fire on all of them. Sonic runs away from the blasts. Knuckles shows up and kicks the robot's cannons off. He then yells at Eggman, saying that he was the one who was going to take care of Sonic. Eggman gets angered and tells Knuckles that he was promised that he would take care of it, but Sonic still has not been defeated. His robot, still carrying Tails, Amy, and Chris, flies off to the other side of the lake. Eggman says he will return Sonic's friends if he hands over the Chaos Emerald. Knuckles looks a bit confused and recalled that Eggman told him earlier that all he wanted was to live in peace. Sonic smugly tells Knuckles that it seems Eggman's intentions were not what he thought they were. Knuckles realizes that Eggman lied to him and feels an anger boiling within him.

Eggman gets Sonic's attention and tells him that his weakness is water. He wonders if Sonic can cross the lake to reach them. Sonic smirks and says he wonders as well before going around the lake and easily destroying the robot's legs. Eggman looks at the scene, shocked by such an easily noticeable mistake and watches E-47 fall to the ground once again. This time, the glass breaks completely and Chris, Tails, and Amy are set free. Amy then begins crying and hugs Sonic (much to his dismay), telling him she knew he would save her. Eggman grumbles and tells E-47 to finish them off. E-47 stands up and goes on a rampage. It fires numerous missiles into random directions and starts to destroy the area. Knuckles tells Sonic that he will handle it, and Sonic says that would be great. Knuckles runs forward, easily dodging the missiles and bullets and jumps onto E-47. He punches through its body as he climbs up it and then reaches Eggman's Egg Mobile. To punish Eggman for his deception, he calls Eggman a liar and punches the Egg Mobile along with Eggman far off into the sky as he disappears in a twinkle of light.

Knuckles then delivers one final decisive punch to E-47's head and the robot finally explodes. The debris is sent flying everywhere and sends Knuckles flying off with the wind. Sonic quickly grabs his arm, saving him from any collision that could have been made with the rocks. After the ordeal, Amy hugs Sonic again, happy that he is all right. Knuckles smiles and goes to walk off. Amy follows Knuckles for a bit and tells him that he must feel like an idiot for trusting Eggman and that he wants to apologize only he is too proud to do it. Knuckles tells her to shut up which she just smiles at. Knuckles smiles back at the rest of them one last time before walking off on his own path once again. 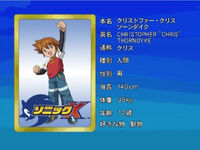 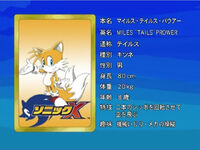