A Crabmeat, from Sonic the Comic #59. Art by Mike Hadley and John M. Burns.

The Crabmeat is a character that appears in the Sonic the Comic series published by Fleetway Editions. It is a crab-based Badnik variant created by Dr. Ivo Robotnik and is among the first generation of Badniks that Robotnik produced.

In the Marble Zone, a Crabmeat and other Badniks caught Tufftee when he tried to being heroic. After tormenting the Mobian, the Badniks choose to turn him into a Badnik with the Portable Badnik Processor. However, Sonic the Hedgehog then arrived and destroyed them, the Crabmeat included.[1] Crabmeats under the Marxio Brothers' command would as well aid the brothers with their schemes until Knuckles took them out.[2]

The Crabmeats of the Green Hill Zone eventually had to share their Zone with the Badniks from Palmtree Panic Zone. However, the arrivals refused to share the Zone with old-style Badniks and started destroying the residential Badniks. The Crabmeat that surived escaped with B.A.R.F. and was used to create some of the Seven Badniks, namely Crabinator and Buzznik.[3][4][5] 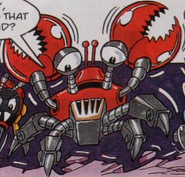 The Crabmeat by Jose Casanovas.

The Crabmeat by Richard Elson.
Add a photo to this gallery

Retrieved from "https://sonic.fandom.com/wiki/Crabmeat_(Sonic_the_Comic)?oldid=1733354"
Community content is available under CC-BY-SA unless otherwise noted.