"Countdown to Chaos" is the twenty-sixth episode of the anime series, Sonic X, and the finale of Season 1, as well as the halfway point of Series 1. It first aired on 28 September 2003 and 27 March 2004 in Japan and the United States respectively.

After Eggman tricked Knuckles and Chris into giving him the six Chaos Emeralds, Chris was held hostage on the Egg Fort II as it took off and goes to meet Lucky, who has found the final Chaos Emerald, and Sonic had to rescue him. The episode begins with Danny, Helen, and Frances playing with a puppet toy of Next until they spot the gigantic fortress flying overhead. Then Sonic runs past while Lucky has just found the last Chaos Emerald in a landfill. The President says that he hopes they are ready for Chaos Control and Tails, Chuck, Amy, Cream, and Cheese use the X Tornado to also rescue Chris. When Eggman is just about to grab the Chaos Emerald from Lucky, Sonic zooms in to smash the machine and G.U.N. Beetles attack Eggman, but the Egg Shields block the missiles and he launches the Egg Beam Cannon on the ground that leaves the Beetles unaffected.

The impact causes Lucky to almost fall into the sea due to being sent flying by the blast, but Sonic rescues him and gets the Chaos Emerald. Eggman, Decoe, and Bocoe then transform the Egg Fort II into the E-99 Eggsterminator. Sonic then comes up with a plan to defeat the machine, using his speed. But Eggman uses the six Chaos Emeralds Knuckles and Chris gave him to empower the Eggsterminator. The Eggsterminator then attacks Sonic and punches him into a building, and then the Eggsterminator goes out of control and continues to pound Sonic very hard. Eggman is impressed by the strength of his robot, but also slightly scared by its power. Then the X Tornado arrives while Sonic, who is still willing to rescue Chris no matter what, tells Eggman that nothing can stop him despite his injuries. The G.U.N. Beetles also attempt to attack, but the Eggsterminator easily destroys them.

Suddenly, the robot uses an extra burst of energy and slams Sonic into the ground repeatedly. Eggman is afraid of his robot now and is angry at it for using all the power from the emeralds, leading to Eggman ordering it to stop as he could not bear to see Sonic getting hurt anymore. In response, the robot lifts up Sonic, now unconscious, and throws him into the air before slamming him once more into the sea, frightening Eggman and his robot lackeys. Unable to bear the sight, Chris breaks free from his restraints and grabs the Chaos Emeralds, and Knuckles barges in to rescue Chris, but Rouge arrives first and flies off with both Chris and the Chaos Emeralds. Then Chris accidentally drops the emeralds into the sea, while the Eggsterminator grabs Rouge and Chris and attempts to crush them. However, with all seven emeralds in his possession, Sonic is able to transform into Super Sonic. His first move is to mortally wound the Eggsterminator by reducing its fist holding Chris and Rouge in it to shrapnel. Eggman does nothing to intervene, knowing that Chaos Control is about to happen. As the malfunctioned Eggsterminator attempts to beat up Super Sonic with its remaining fist, the super-powered hedgehog halts off its attack and destroys the Eggsterminator within a matter of seconds. Chaos Control has begun, but Chris tearfully desired that Sonic cannot leave. For some reason though, instead of sending Sonic back home, two locations from his planet, Angel Island and Mystic Ruins, are assimilated into Earth. With his home brought forth, Knuckles resumes his task of guarding the Master Emerald. Dr. Eggman, defeated again, stumbles upon a stone tablet, setting the stage for his next plan. The episode ends with Sonic finding Chris and saying "Hey! Long time no see!". 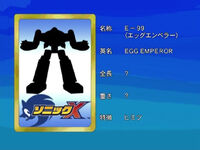