Not to be confused with Cosmic Wall.

Shadow in Cosmic Fall, from Shadow the Hedgehog.

Looks like the whole ARK is falling apart around me.

Cosmic Fall is one of the sixth Stages in Shadow the Hedgehog. It can be reached by completing the Hero mission of Iron Jungle or the Normal mission of either Space Gadget or Lost Impact.

Cosmic Fall takes place aboard the Space Colony ARK, which is collapsing due to the powers of the Black Arms.

Shadow Chaos Controls himself into an area based-around the Eclipse Cannon of the ARK, expressing frustration with the confusion of his memories. This however, puts him straight into a confrontation with the G.U.N. Commander, who reveals the reason for his antipathy against him as he witnessed the Ultimate Lifeform's creation by Gerald and Black Doom fifty years ago, along with his relationship with Maria. Shadow dodges a bullet from the Commander's gun, while the Commander himself questions if Shadow really did lose his memories. Shadow on the other hand promises to submit to justice if it turns out he really was responsible for the death of the ARK's population, walking away and leaving the Commander to question his own beliefs.

Shortly after starting the level, Shadow then notices the ARK's passageways collapsing all around him. After traversing through the debris, he eventually encounters Doom's Eye, who asks Shadow to retrieve a Chaos Emerald located in the ARK's power plant. As they enter the first interior area, Vector the Crocodile makes a surprise entrance, desperately searching for the ARK's computer room. The objective Shadow chooses ultimately depends on what actions the player takes in the final room of the power plant. Fall from the doorway to the floor and you'll be forced to complete the dark mission. However, you can also Triangle Jump across breakable panels or Light Dash to an elevated platform on the other side, from which you can traverse one more section of crumbling debris before finding the computer room and completing Cosmic Fall's heroic mission.

Cosmic Fall is known for its immediate difficulty. There is no main floor or ground, unlike most other levels, and many platforms are simply floating as they fall due to the low gravity.

The following weapons can be found in Cosmic Fall:

The Secret Door houses a switch that, once activated, will open a nearby door with a 1-Up and creates Ring trails that can be used to Light Dash through the rest of the Stage.

The Chaos Emerald will be at the first Goal Ring that is come across.

Triangle Jump across the emergency panels upon seeing the first Goal Ring, as the actual goal of this mission is a rocket.

What makes this Cosmic Falls' Expert Mode especially hard is the lack of enemies. Before, the player could use the Black Hawks to get from platform to platform, but now the Jump Dash must be used in their places. Luckily, there is no longer a time limit in this version of the Stage.

A trick to skip an entire section starts in the inside corridor after the second Save Point. In the room with the Artificial Chaos, jump down to grab a pulley and when the the upper platform is reached, grab the blue energy core. Use it right away then ride the transport outside. As soon as Shadow lets go, use Chaos Control again in order to skip an entire section.

After the sixth Save Point, there is no longer a Jump Vehicle. Instead, the player will now need to use the pulley. Once at the top of the pulley, wait for the platform to float by then jump on to it. This is not much harder, but there is now less room for error. The next section is especially tough, as the player must jump on a series of moving platforms. 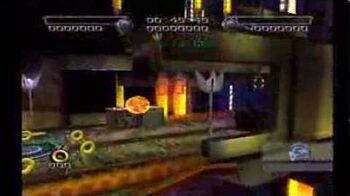 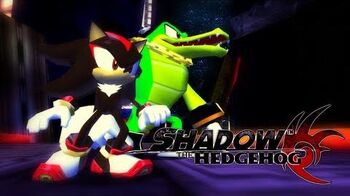 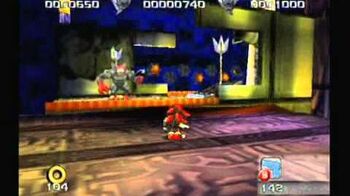