"Cosmic Crisis" is the fifty-fourth episode of the anime series, Sonic X. It first aired on 12 March 2005 and 17 September 2005 in France and the United States respectively.

Chris arrives in Sonic's world as his twelve year-old self. He makes contact with everyone and is introduced to Cosmo, but Sonic faints shortly after. Apparently, the recent battle had tired him enough to faint.

Back at Cream's house, Cosmo explains the Metarex goals and the consequences of the planet egg's removal. Cosmo also admits that she's the only survivor from her planet, which was eliminated by the Metarex.

Later on, Tails tells Chris that it was amazing that he made the teleport gate in six months. Chris finally realizes on Sonic's world it has been only six months since he said goodbye with Sonic. Chris explains that in his world, the time is six years ahead of Sonic's world and he's currently eighteen years old. As Tails, Amy and Chris enter to Cream's bedroom to tell that to Sonic, they realize he had woken up and left by the window. Sonic, meanwhile, returns to the place of the last battle and finds out that the fight stopped there. Vanilla gives Chris the clothes she made from her memories.

Everybody (except for Knuckles, who's suspicious of Cosmo) agrees that the Metarex must be stopped and they decide to go into space to destroy the Metarex and to find the lost Chaos Emeralds. Luckily for them, Tails has just finished to build his new invention: a big flying fortress called the Blue Typhoon. Unfortunately, his new ship used to be powered by the Chaos Emeralds. Chris thinks that they could use the Master Emerald. Knuckles disagrees, but with some female "persuasion" (where Amy, Cream and Cosmo beat him up and Sonic's refusal to help as he claims that he does not get into fights he cannot win), he finally agrees.

At the same time, another Metarex, the Metarex Spike, is sent to the planet in order to destroy Sonic and the Blue Typhoon. A fight engages between the Metarex Spike and Sonic and Knuckles. With the help of the Typhoon's primary weapon, the "Sonic Power Cannon", the Metarex Spike is destroyed. Sonic falls to the sea, but Chris takes off in the Hyper Tornado and comes to the rescue.

While all this happens, Cream comes back to her house and asks her mother to depart too. Vanilla agrees and Cream hugs her to say goodbye. The Blue Typhoon takes off, but it is followed by Dr. Eggman and Rouge. 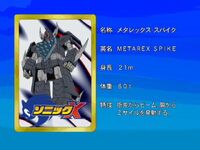 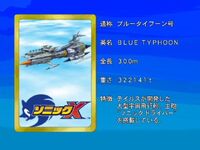