The Cosmic Casino Zone boss is a vehicle that appears in the Sonic the Hedgehog series. It is a modified Egg Mobile created by Dr. Robotnik. It was used by the doctor to combat Sonic.

The Cosmic Casino Zone boss is a modified Egg Mobile with a headlight on its front, gray edges, and flashing blue lights in the shape of stripes on the sides. A giant pink gem is incrusted on its underside, with two large electromagnets on either side of it. It also features eight orange gems rotating horizontally around the middle of the vehicle.

Robotnik's vehicle possesses the ability to fly at great speeds. The gem on its underside can as well be harnessed and used as a weapon.

In Sonic the Hedgehog Pocket Adventure, Dr. Robotnik used this vehicle to attack Sonic as he passed through Cosmic Casino Zone. In spite of Robotnik's efforts though, his vehicle was ultimately destroyed by Sonic.

A variant of the Egg Mobile that moves around a pinball arena. The gem on its underside can damage the player. It takes eight hits to defeat it.

When Sonic jumps down into the large pinball table at the end of Cosmic Casino Zone Act 2, Dr. Robotnik will appear in his newest vehicle and move towards the center of the arena, initiating the boss battle. Robotnik will then start to bounce off the walls and floors at different angles. After taking four hits, Robotnik's movement speed will greatly increase. At certain intervals, Robotnik will temporarily pause in order to focus on Sonic.

This boss requires eight hits to be defeated. To deal damage to this boss, the player has to reach Robotnik in his cockpit. This can be done quickly with the help of platforms, Flippers, and Bumpers around the arena. However, the player must avoid the pink crystal on the bottom of the vehicle, as touching it will damage Sonic.

After being defeated, the Cosmic Casino boss will blow up and Robotnik flees in his Egg Mobile. Leaving the player to open the capsule underneath the arena, as the boss' destruction so kindly clears the way, and clear the Act. 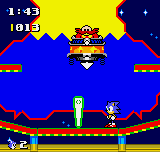