A casino area with many giant pinball tables.

Cosmic Casino Zone is the third zone in Sonic the Hedgehog Pocket Adventure.

Cosmic Casino Zone is a remake of Casino Night Zone from Sonic the Hedgehog 2, being a casino-themed area with a fairly similar level design.

In this zone, the player must navigate Acts filled with bumpers, flippers, and various other pinball-themed obstacles. There are also many spikes placed around the Acts, so it is very easy to fall into them.

The boss of Cosmic Casino Zone is Dr. Robotnik, who be flies around in a hovercraft with an electrified bottom, similar to the Egg Claw from Sonic the Hedgehog 2. During this boss battle, Robotnik bounds around the arena and occasionally pauses to home in on Sonic. He cannot be damaged from below. After the player beats him, they will get to the capsule and clear the zone. 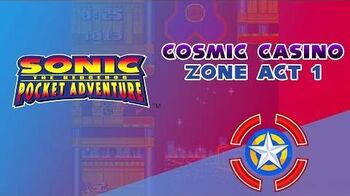 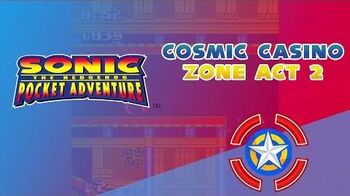