Coral the Betta, from Sonic the Hedgehog #260.

Her duty as priestess

Failing in her duty as priestess

My name is Coral, and I'm priestess of this shrine.

Coral the Betta is a character that appears in the Sonic the Hedgehog comic series and its spin-offs published by Archie Comics. She is a mobian betta and the priestess of the Eusebes Temple.

Coral is a mobian betta fish with orange skin/scales. She has a long thin tail fin and no toes on her feet. Additionally, she has shoulder-length fins growing from her head, giving the appearance of hair, and two smaller additional fins growing on her forearms. Coral has purple eyes and a white muzzle with no nose and two smaller white orbs on her forehead. For attire, she wears a mint green dress with a purple sash and a dark mint green trim, a cord necklace with a white pendant, and a mint green turban which appears to have four white corals ornaments, hence her name, with purple stripes on them.

At some point in her life, Coral was chosen over Princess Undina to be the priestess of the Eusebes Temple.[2] After going through some training, Coral ascended to the title of priestess and took over all the duties following with it.[3] Eventually, she took Pearly the Manta Ray as her apprentice and trained her in the rites.[2] Some time after that, Coral and Pearly found a wounded Razor the Shark, and nursed him back to health.[4]

In the beginning of the Shattered World Crisis, Coral was performing her duties by giving rites to Aquarius at the Eusebes Temple when she is alarmed by Tikal informing her that she would soon meet some great heroes needing her help to save the world.[5]

When Coral was aiding the reincarnation of Aquarius, she was contacted by members of the Freedom Fighters–Sonic the Hedgehog, Amy Rose, and Rotor the Walrus–from the surface. Realizing they were the heroes the spirit spoke off, Coral sent Razor the Shark to escort them to her. When she finished the start of Aquarius' rebirth, Coral welcomed the Freedom Fighters where she introduced herself. However, when the Freedom Fighters revealed they had not been send by the spirits to help them as she thought, Coral left before she could panic. As night fell, Coral went to watch over Aquarius' cocoon where she talked with Amy about her doubts about her role as a priestess.[3]

The next morning, Coral freaked out when she discovered that Aquarius had not yet been reborn. Though Sonic tried to calm her, Razor misinterpreted this and nearly attacked Sonic. No sooner, Captain Striker the Mantis Shrimp and the Meropis City Guard came to the Temple for their daily visit, only to discover that Coral had allowed the Freedom Fighters to trespass on sacred ground without permission.[3] Upon Striker's questioning, Coral then revealed that Aquarius had not yet been reborn. Infuriated, Striker branded Coral a charlatan and decided to take her to King Puff and Queen Angelica to answer for her actions. With Razor, Sonic and Amy coming with her, Coral was brought to Meropis where she tried to assure the king and queen that she was still committed to her duties. However, even with Sonic backing her claims up, the king and queen ignored Coral's pleads and stripped her of her title and privileges before sending her back to the Eusebes Temple with her friends to spend her last night there. Emotionally shattered, Coral declined the Knothole Freedom Fighter's offer to come with them and tried to maintain Meropis' shield one last time. Despite her efforts however, she fails due to stress and self-deprecation and breaks down in tears. As such, Meropis lost it's shield and Dark Gaia monsters began invading Meropis and the temple.[2]

Sonic, Amy, Rotor, and Razor managed to thwart the initial wave, and Coral began blaming herself for the attack. However, her friends-particularly Razor-supported her, and she agreed to try raising the shield again while the others split up to defend the shrine and go to the aid of the Meropis City Guard.[6] Sadly, her initial attempts proved fruitless, but help soon arrived in the form of Tikal, the same spirit who had addressed her before. Together with Pearly and the reawakened Aquarius, whose prolonged time in the cocoon had been a foreshadowing of a great evolution, she managed to restore the shield, driving out the remaining monsters. For her efforts, Coral's station as priestess was reinstated, and she subsequently taught Amy the Mystic Melody, and was surprised by the hedgehog's aptitude.[7]

Sometime later, Coral listened in on a live broadcast being held by Sonic and Sally Acorn.[8] She also watched the world get restored by Chip alongside Crusher, Pearly and Razor.[9]

Coral heard the news that Princess Undina has gone missing, which greatly upset her. Upon seeing this, Razor decided to set out to find Undina.

Coral is a very sweet, giving and devoted person. She is incredibly humble, but unfortunately to the point where it loops around to self-deprecation. As such, she is very sensitive and it does not take much to make her doubt her abilities and worth, leaving her always questioning what she is doing wrong and with little faith in herself. Also, when things do not go as planned, she begins to shudder and panic, which makes her rely on Razor in such emergencies. She also has limited knowledge about land cultures, not knowing Chao lived on dry land too.

Coral is not really passive or a pacifistic, though she has an easier time standing up for others instead of herself.

As an aquatic mobian, Coral is capable of aquatic respiration, allowing her to breathe both on land and underwater.[2]

Coral is pretty skilled when it comes to magic and is capable of playing the Mystic Melody. With it, Coral can aid the reincarnation of Chao, activate magic rings to power Meropis, sustain the watery shield that protects the citizens from harm and supposedly communicate with ancient spirits. According to Amy Rose, Coral plays it in a "lovely" way.[3] However, the Mystic Melody requires Coral's concentration or it will falter.[2]

Razor the Shark is the self-appointed protector of the Eusebes Shrine and is extremely loyal to Coral, as having has sworn to look after her after she saved him. Whenever he thinks Coral is harmed or being talked down to, he is easily provoked and quick to defend her and her honor. Coral is also very supported by him as Razor never loses faith in her and is always willing to give her support. Additionally, wherever Coral goes, he will follow her. On Coral's end, she is very trusting and caring of Razor. She sees him as a dear friend and is always happy to have him by her side no matter what.

Pearly the Manta Ray is Coral's apprentice. The two of them share a close bond and Coral absolutely is adored by and is a role model to Pearly. Coral trusts Pearly enough to look after the Chao with her and practice the rites.

Coral studied alongside Princess Undina in the hopes of becoming a priestess, and they are shown to have been very friendly with each other. When Coral was chosen for the position, she distinctly remembered that Undina was kind and supportive to her, even as others were upset over the choice. When she heard that the princess had been kidnapped, she was very distraught and bemoaned her inability to help. Undina, for her part, remembers Coral as being very sweet and thoughtful.

Coral really caring for the sacred Chao of Meropis, Aquarius. After becoming priestess, the two became close to each other performing daily rites. However, after Aquarius entered another reincarnation cycle and did not emerge from her cocoon as scheduled, Coral became stripped of her title by Meropis' rulers and thought that she kills her. However, Aquarius soon emerged from her cocoon, which left Coral overjoyed to have her back and hugged her.[2][7]

Amy Rose became a good friend of Coral's after she spent some time with her at the Eusebes Shrine. She has been caring and attentive to Coral's problems, and has stuck by her side to protect her from harm. When Amy first heard Coral's performance with the Mystic Melody, she became fascinated by it and described it as "lovely." Some time later, Coral trusted Amy enough to teach her the Mystic Melody.[2][3] 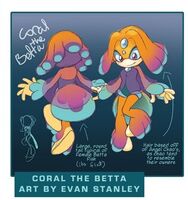 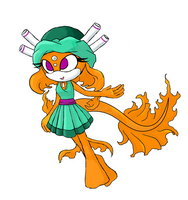