The Cop Speeder, from the console/PC version of Sonic Generations.

The Cop Speeder[1] (コップスピーダー[2] , Koppu Supīdā?) is an enemy that appears in the Sonic the Hedgehog series. It is a mass-produced robot created by Dr. Eggman that is designed as a Kiki driving a hovering police car.

The Cop Speeder is evidently based on a police car. It consists of a rounded white floating transporter-like car piloted by a Kiki. In Sonic Adventure, its face is blocked by a black cover. However, the face of the Badnik is opened in Sonic Generations.

The Cop Speeders' first appearance was in Sonic Adventure and later its remake, Sonic Adventure DX: Director's Cut. In this game, they are only found in Sonic, Tails and Knuckles' version of Speed Highway. Here, they are either positioned on the edges of the areas where they remain in standby mode until the player approaches, or are just patrolling areas until the player arrives. Upon activating, their sirens start flashing and blaring.

Cop Speeders are rather difficult enemies. Once spotting the player, they start driving haphazardly around in arcs, which makes them hard to get a lock on. Meanwhile, they will try to hit the player from above. Sometimes, not even the Homing Attack can catch up with them.

In the console/PC version of Sonic Generations, Cop Speeders from somewhere across spacetime appear as enemies in both Acts of Speed Highway. In gameplay, their movements are stabler than in Sonic Adventure and they are easier to take out. However, their still-random movements make it unwise to use the Boost against them.

In Mario & Sonic at the Sochi 2014 Olympic Winter Games, Cop Speeders appear as obstacles. In this game, they possess their design from Sonic Generations.

In Sonic Runners, a Cop Speeder makes a cameo appearance on the cheat menu icon.

The Cop Speeders are capable of midair levitation and can move at speeds nearing that of Sonic's.[3] 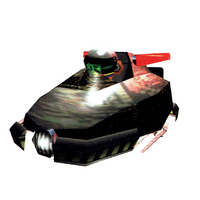 Cop Speeder in the cheat menu icon of Sonic Runners.