The Colossal Worm (ジャイアントワーム, Jaiantowāmu?, lit. "Giant Worm"), also known as the Giant Worm, is an enemy that appears in Sonic Chronicles: The Dark Brotherhood. They are giant invertebrate animals that are a natural part of the wildlife on Earth.

The Colossal Worm mostly resembles a gigantic centipede/earthworm. It has black skin, a tan underbelly and glowing orange lines running down its body with an orange hook at the end of its body. It also has four orange mandibles and a small mouth.

The Colossal Worms are known to be very aggressive and will suddenly pop out of the ground to eat its foes.

The Colossal Worms can only be encountered in the Mystic Ruins, and only once in their respective locations, as they do not respawn. The Colossal Worms are rather unique enemies in Sonic Chronicles: The Dark Brotherhood, as they are the only regular enemies in the game that can launch a surprise attack; if the player walks over a Colossal Worms hiding place, they will suddenly pop out of the ground and attack the player.

The Colossal Worms' basic attack is slamming their entire body down on the foe. Their POW moves are Acid Spit (どくえき, Doku eki?, lit. "Venom") and Swallow (飲みこみ, Nomikomi?), which can instantly knock out a character. 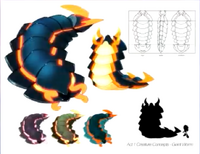 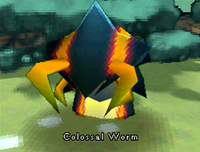 A Colossal Worm in battle.