Colonel (カーネル, Kāneru?) is a character that appears in the Sonic the Hedgehog series. He is an anthropomorphic koala from Blaze's world and a member of the Coconut Crew youth association from Southern Island. He is a self-proclaimed spy and serves as the Coconut Crew's intelligence and infiltration specialist.

Colonel helps Sonic with unknown mysteries about certain places he explores. He gives out missions, and decorates Southern Island with various features when paid with Rings.

In Sonic Rush Adventure, after Sonic, Tails, Marine finished the construction of the Ocean Tornado, Colonel arrived at the newly constructed dock and casually greeted Marine.

After having been introduced to Sonic and Tails, Colonel approved of Sonic and his friends building the Ocean Tornado, saying that they could sail anywhere on the seas in that. When Marine asked Colonel if he knew of a place that she, Sonic and Tails could explore next, Colonel remarked that he had plenty of intel on that, but that this kind of info had to cost them. However, Colonel was persuaded by Marine to give them this info for free, and Colonel told them that he remembered seeing a long stretch of shallows to the west of the mechanical island, which he had a hunch would lead to a hidden island. As such Sonic, Tails and Marine decided to take a look there.

When Sonic and Tails were about to set off in the SS Tornado EX to return to their own dimension, Colonel and some of the other members of the Coconut Crew came to say goodbye to them alongside Blaze. 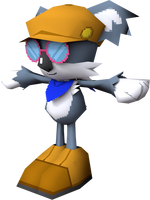