Sonic in Collision Chaos, from the 2011 remaster of Sonic the Hedgehog CD.

Collision Chaos (混沌の衝突[2], Konton no shōtotsu?) is the second Round in Sonic the Hedgehog CD. It consists of a forest region full of machines, located on Little Planet. As with the other Rounds in the game, Collision Chaos consists of two Zones and a third, shorter Zone that features the Round's boss.

In the present, Collision Chaos is a pink mechanized forest full of white-blue machines. The place is dotted with blue pillars of all shapes and sizes, as well as identically colored pipes running through the foreground. Neon signs line up across Collision Chaos, which display flickering, gibberish texts. It takes place during late sunset, with odd orange dots possibly representing an autumn forest sitting at the foot of a pink lake. Though the lake is shown at the very bottom of the Zone, it also curiously appears upside down at the very top as well.

In the past, Collision Chaos is still under construction, with many of its gimmicks either being absent or replaced with grassy platforms. Regardless, a few blue girders can be seen sticking out of the level, which is now sporting a golden color scheme. Instead of machines, there are yellow prehistoric-esque plants with oddly shaped leaves and patterns. No neon signs are shown here; instead, airborne rocky structures replace them, which the player can stand on. Taking place during early sunset, a much more recognizable forest sits near the lake, which is reflecting the orange sky above.

In the bad future, Collision Chaos features a darkened sky at dusk adorned with red clouds, and seems to be haunted with gray machines. There seem to be no plants present here aside from the dead orange grass, and the signs are still illegible but fully functional. The lake here looks to be teeming with some kind of toxic waste, as evidenced by its reddish-orange tint. The background now features a giant mountain covered in, presumably, more dead grass and plants, with several green-colored factories and pipes in front.

In the good future, Collision Chaos is a futuristic, turquoise colored region, which is now set during the day. Plants are futuristic and natural, adding pleasing attractions to the location, while the waters below are crisp and clean. The mountains in the bad future are also present, but are now fully teeming with plant life. Several blue-colored futuristic buildings can be seen among the pillars of rock.

Having invaded Little Planet, which includes Collision Chaos, Dr. Robotnik would install robot teleporters in the past and infest the region with Badniks. He would also put up some Metal Sonic holograms to terrorize the Animals that live there. Using these elements, Robotnik managed to conquer the future of the planet and rewrite history in his own image. However, the impact of his operations turned Collision Chaos into a haunted and abandoned region.

After Sonic the Hedgehog arrives in Collision Chaos, he comes across Amy Rose, a young hedgehog girl infatuated with him who begins following him around. However, she is soon kidnapped by a robotic version of Sonic. Now having to worry about rescuing Amy while battling Robotnik, Sonic starts re-writing Collision Chaos's history, thereby reverting the doctor's effects in the region. Some time later, Sonic finds Dr. Robotnik in a machine in a pinball-like area, ready to fight him. After defeating Robotnik and making him retreat, Sonic continues onward to Tidal Tempest.

Collision Chaos features a heavy emphasis on gimmicks that bounce the player around. Rows of spheres are placed in tall corridors of the Round, with Flippers usually placed at the very bottom to launch Sonic into them. A recurring element of the Zones are slotting Springs that pop out of the ground when Sonic runs past them, and horizontal ones are typically placed right next to sloped ramps in order to launch the player high into the air. Some spikes also slot out of the ground too though, which the player must take into account when backtracking.

Bumpers are all over the place in both Zones, bouncing the player every which way, whether helpful or not. Most are the typical round variant, but new long and skinny variants are placed either at the foot of or a small distance above the ground, and sometimes even vertically, in the walls. Fatter versions also move up and down in the air, acting as bouncing platforms for the player. Usually in the lower sections of the rounds are corridors containing rotating spike chains (or more of the aforementioned slotting spikes) with small gaps placed in the ground with springs below, sending the player into danger if they do not move quickly.

Lastly, Zone 2 features a unique set piece at the very top of the Zone in the form of a large, rotating cylinder with many smaller platforms attached that rotate along with it. These platforms can be stood on, but only when they are properly facing outwards, on the same plane of view as the player. They also rotate, though only in the future.

The boss of Collision Chaos is the Egg Tilter, a small machine where Dr. Robotnik is located, above a large, pinball-like area. Here, Sonic has to deal with spikes, spheres and small bombs Robotnik throws very often.

In the Sonic the Hedgehog comic series and its spin-offs published by Archie Comics, Collision Chaos (named Collision Chaos Zone) appeared as a Zone built by Dr. Ivo Robotnik on Mobius, and where Stardust Speedway Zone was located. This Zone would be the place where Sonic first battled Mecha Sonic.

After the Super Genesis Wave re-wrote history, Collision Chaos appeared as a Zone on Little Planet. Its history was mostly the same as its game counterpart. 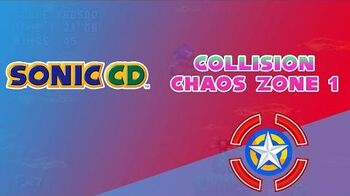 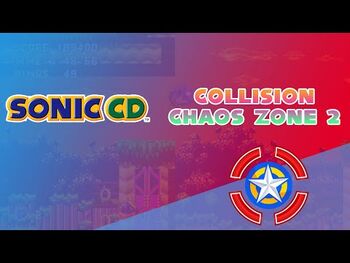 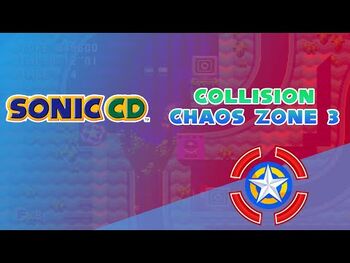 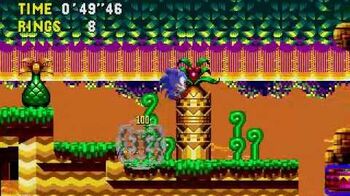