The map of the Cocoa Island, from Tails Adventure.

Cocoa Island[2] (ココアアイランド[1], Kokoa Airando?), also called Tails Island[3] or Kokko Island,[4] is a location that appears in the Sonic the Hedgehog series. It is a tiny island in the spring-like South Pacific which is not found on any map. Cocoa Island was also where Miles "Tails" Prower lived for an unknown period of time.[1]

Cocoa Island is a floating[1] island located slightly above the ocean. The island is inhabited by many Flickies, and Miles "Tails" Prower as well for some time.[1]

A natural, peaceful island, Cocoa Island has many natural environments, such as forests and mountains. Beneath it, there are many coral reefs. Cocoa Island is also surrounded by smaller islands.

Before his first meeting with Sonic the Hedgehog, Tails lived on Cocoa Island. One day though, the island was invaded by the Battle Kukku Empire, whose battleship and battalions of soldiers set Poloy Forest on fire. Waking up from the chaos, Tails met a Flicky who informed him about the empire's attack. Tails then noticed a large mecha in the flames, as the empire's leader, Great Battle Kukku, hunted for the Chaos Emeralds that were hidden around Cocoa Island.[1]

In the Sonic the Hedgehog comic series and its spin-offs published by Archie Comics, Cocoa Island was an island on Mobius that was discovered by Tails during the First Robotnik War. It was as well there T-Pup was created. As Tails later brought Antoine D'Coolette and Bunnie D'Coolette to Cocoa Island for the pair's honeymoon, the heroes were attacked by the Battle Bird Armada who had occupied the island. In the end, the heroes drove the armada off the island. 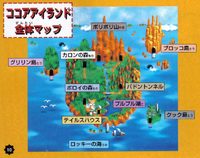 A map of Cocoa Island, from the Japanese manual of Tails Adventure.