You may be looking for Cluck, Cluck (SatAM), Cluckbird or Clucker.

The Cluckoid, from the Wii U version of Sonic Lost World.

The Cluckoid[1] (ケッコー[2], Kekko?) is an enemy that appears in the Sonic the Hedgehog series. It is a mass-produced, rooster-based Badnik model created by Dr. Eggman that can blow its targets away with a gust of wind.

Based on roosters, Cluckoids look like real-life weathercocks standing on top of a wind vane. They also possess white armor with with an orange wattle and comb each. Additionally, they have a pair of engines resembling wings.

In Sonic Lost World, the Cluckoids' design remained closely the same, except for a few minor details which include a red wattle and comb, and cyan eyes.

In Sonic & Knuckles and the lock-on game Sonic the Hedgehog 3 & Knuckles, Cluckoids are only found in Mushroom Hill Zone Act 2. When approached, they inhale deeply before releasing a gust of wind at the player. The wind itself does not damage the player, but it can push them away and into obstacles. If they are not creating gusts, the Cluckoids can be defeated with a Spin Jump. Also, upon its destruction, a Cluckoid will release an Animal.

In the Wii U/PC version of Sonic Lost World, the Cluckoids returned as enemies. During the game, the Cluckoids and the other badniks got hijacked by the Deadly Six. The Cluckoids themselves can be found in Tropical Coast Zone 2 and Frozen Factory Zone 2.

In Tropical Coast Zone 2, Cluckoids are placed on narrow routes or floating islands. After noticing the player, they will create gusts a wind in an attempt to blow Sonic away from themselves. The player can use the Homing Attack or the local giant rolling apples to defeat the Cluckoids easily. In Frozen Factory Zone 2, when Sonic is enveloped in a snowball, Clukoids will try to blow the player off the routes. Rolling into the Cluckoids defeats them easily though. Also, upon its destruction, a Cluckoid will release an Animal. 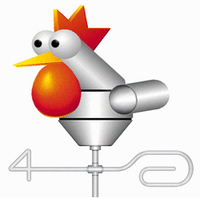