A fight in Club "Rouge".

Club "Rouge" is a fighting arena in Sonic Battle. It is owned by Rouge the Bat. This is where the player can fight Rouge in Story Mode, located in Night Babylon.

The stage is designed with a casino and pinball theme. Four walls are located around the middle area and a bumper-like table can be found in the center. Flashing lights and buttons can be seen on the ground.

Club "Rouge" first appears in Rouge's episode. After Rouge "kidnaps" Emerl, she brings him to the club in order to train him to become the "ultimate robot thief". During Emerl's stay at Club "Rouge", the bat trains him with tests such as KO'ing a Guard Robo five times in a set time or not taking damage in a set time. After she feels that Emerl is trained enough for a theft, she takes him to a building in Emerald Town for his first heist.

Knuckles comes to Club "Rouge" to look for Emerl, who is preparing to fight with Rouge. Emerl and Rouge battle, and Emerl defeats Rouge. After the fight, two Phis appear, and attack Emerl and Knuckles. They defeat the Phis, and obtain the two Emerald Shards that were powering them. Rouge then gives Emerl another shard that she found. Knuckles and Emerl then leave Club "Rouge" to find Tails.

Amy comes to Club "Rouge" to fight Rouge, after Rouge had stolen Emerl from her. She fights and keeps losing but continues to fight until she passes out.

Shadow's Episode starts off in this location, as he was brought to the club by Rouge so that he may rest. 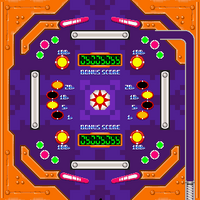 The map of Club "Rouge"
Add a photo to this gallery