Clove the Pronghorn, from Sonic the Hedgehog #263.

Clove the Pronghorn[3] is a character that appears in the Sonic the Hedgehog comic series and its spin-offs published by Archie Comics. She is a mobian pronghorn, and the sister of Cassia the Pronghorn. Along with her sister, Clove is the regional Egg Boss of the Northamer Egg Army division.[4]

A couple of reasons were behind Clove's creation. One was that Aleah Baker wanted to introduce related sisters to bring more sibling interaction into the series. From the story "Consequences", Paul Kaminski wanted more world-building by introducing new Egg Bosses, with a more sympathetic angle being suggested, so Aleah Baker made Clove and Cassia to present the story from sisters' point-of-view to create a new dynamic.[1]

While Clove's basic personality was down from the start, she was early on nearly a badger. Also, early visual concepts had Clove and Cassia in different shades of blue, then yellow and light green respectively, then the dark/light green with the grey and black uniforms. Eventually, Aleah decided to make Clove a pronghorn for two reasons: to get neat characteristics (Clove's horns were made longer to show she was more mature than Cassia) and because pronghorns are fast animals which worked well within the series.[1]

Clove's initial designs were created by Aleah Baker, which was then elaborated on by Evan Stanley. During the development, Clove's design involved various hairstyles, different head shapes, and several types of boots.[5]

Clove is a mobian pronghorn and she stands slightly taller than Cassia. She has paris green fur with curved ears, a medium-sized muzzle, four smooth tufts of fur on the back of her head, a short bushy tail, and short black two-prong antlers on her forehead.

She has white fur on her muzzle and in patches around her eyes. She has dark gray fur on her ear tips and on the bridge of her nose. Her eyelids are either furred the same shade of gray, or she is wearing gray eyeshadow. She has purple eyes and thick eyelashes.

She wears an asymmetrical gray (with white trim) Eggman Empire-inspired uniform resembling a tailcoat or dress. Two white segmented bands run around the right side of her torso, ending in yellow buttons on her left side on both the front and back. The bottom of the jacket is skirt-like with white "coattails" hanging from the bottom segmented band. Her tail sticks out from between these. Additionally, she wears black one-piece pants/boots with silver accents, high heels, and yellow toes resembling cloven hooves. She wears white gloves with yellow cuffs.

At some point, when Cassia contracted a disease, Clove joined the Eggman Empire, thinking Dr. Eggman may have a cure for the illness.[6] The newly formed Northamer Egg Army would then find themselves at odds with the Wolf Pack, fighting to claim the territory of the local Gaia Temple. Unknown to the Egg Army, it was a fake Gaia Temple and the Wolf Pack made it seem as if it was of importance. Nonetheless, Clove and her army still claimed it.[7]

Clove and Cassia were in charge of the excavation at a Crystal Cave that contained a Chaos Emerald to obtain the Emerald. However, their operation came to a halt when the cave's terrain proved too dangerous and could not proceed.[8]

After leaving the excavation site for a while, Clove and Cassia returned to it, only to discover that the mine had been attacked and the Badniks had been destroyed. As Cassia wished she had stayed to protect the excavation site herself, Clove replied that she would much rather not have Cassia being destroyed by the invaders, despite her sister's protests. To investigate if the intruders had retrieved the Chaos Emerald, Clove checked the footage from the security cameras and found out Miles "Tails" Prower, Sally Acorn and Antoine D'Coolette were the invaders. Clove then reported to Eggman, who was displeased at his Egg Bosses' incompetence about the invaders and was told to scrap the excavation and stand by for a new objective.[9]

After finding out that E-118 Tau and the rest of the Badnik Horde had wondered off, Clove discovered a small glitch in the security system. Upon learning of the incursion, Clove went to investigate and eventually caught Sally Acorn sneaking around.[10] Confronting the princess, Clove explained her view of the situation, believing Sally would her hear out. She managed to talk her opponent into backing down, though she admitted being disappointed that Sally would so readily agree to her demands. Considering the situation resolved, Clove left to return to her post. Seeing her good side, Sally offered to help her, but she calmly declined, believing that not fighting was "help" enough.[3] When she returned, she found Cassia injured after a scuffle with Bunnie D'Coolette, just before she collapsed from her illness. Clove later confronted Eggman about this, and was devastated to learn he had lied about the cyberization's benefits to gain the sisters' loyalty; even though the treatment will do nothing to actually cure Cassia, without the treatment, Cassia would die. Resigned, Clove went to the medical ward to see Cassia, who apologized for her recklessness and expressed her eagerness to be free of Eggman. Clove couldn't tell Cassia the truth, unwilling to hurt her further.[6]

Days later, Clove was contacted by Eggman ― who, to her frustration, again showed no concern for Cassia during the transmission ― for an important mission. Leaving Cassia in charge, she headed to the Death Egg to join her employer and fellow Egg Bosses.[11] Eggman teamed her with fellow Egg Boss Thunderbolt, with the mission of shutting down Eggmanland's defenses. Despite being riled up about Thunderbolt insulting Cassia, Clove managed to complete her mission, and later joined her fellow Egg Bosses for the final confrontation against the Naugus Twins.[12][13] Upon returning to her base, Clove was surprised to see a welcome-back party organized by Cassia.[14] She later witnessed the actual Gaia Temple rise up from its hidden position, realizing her Egg Army claimed a fake.[15]

Compared to Cassia, Clove is cool, collected, and mature and approaches unknown matters cautiously. She is calculating and confident, giving off a somewhat smug air when bargaining with Sally.[3] She is very protective as seen in her interactions with Cassia, though to the point where she appears overprotective.[9] In fact, her love for her sister is her primary, if not only reason for serving Eggman in the first place.

Clove is diplomatic, a smooth talker, and a bit of a liar. She is calm and reasonable even when speaking to her enemies, which makes her very persuasive. She seeks to resolve conflicts peacefully and diplomatically if at all possible, relying on a strong people sense that gives her a talent for telling others what they want to hear. By the same token, she is not fully honest with her sister, withholding painful information from her. She is seemingly treated with dignified respect by the Northamer Egg Soldiers and carries herself nobly.

She seems to strongly dislike pointless violence, breaking out in a sweat when Eggman ordered her to behead Wendy Naugus and covering her mouth at the sight of the paralyzed Tassel Guy. She's highly defensive of Cassia and can't stand anyone badmouthing her. She is logical and critical of people who aren't, finding Thunderbolt's refusal to abandon her mechsuit, something Eggman could easily build another of, a bit ridiculous.

Clove wields a staff that can generate a purple energy scythe. Her proficiency with it is unknown.

Cassia the Pronghorn is Clove's little sister, whom Clove serves as parental guidance for. She cares deeply for her sister and her well-being, as she constantly worries about Cassia's health and was willing to face Eggman's wrath over the excavation invasion alone to protect her.[9] She even went so far as to join the Eggman Empire to save Cassia's life.

Towards Cassia, she is very protective and does whatever she can to keep her safe, which Cassia can find frustrating and stifling, but honestly appreciates. Overall, they have a close sisterly bond where both care about each other. Clove often calls Cassia "Cass." 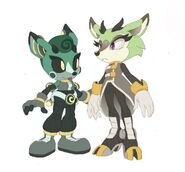 Retrieved from "https://sonic.fandom.com/wiki/Clove_the_Pronghorn?oldid=2135212"
Community content is available under CC-BY-SA unless otherwise noted.