A clockwork-themed pyramid set at night during an Aurora Borealis and a meteor shower.

Clockwork Pyramid[1] is a race track that appears in Team Sonic Racing. It is based on Sandopolis Zone.[1]

Clockwork Pyramid is a circuit located in Sandopolis, a desert region on Angel Island, and takes place in the middle of the night during an Aurora Borealis and an meteor shower. In the background of this track, one can see numerous sand dunes and artificial pyramids, whose peaks are disconnected from the rest of their structures and floating in midair. The track leads across the aforementioned mechanical pyramids, and passes through their interior and exterior. The track also has several clock gears and reactors along it.[2] Also present here are ancient buildings and sculptures of echidnas, and grandstands which has cheering Chao sitting on them.

Along the Clockwork Pyramid track are numerous spots with moving sand and splashed water that only Technique-Type characters can drive across without losing speed.

In addition to the moving sand, there are several moving clock gears that appear in various spots. These clock gears have holes in them, allowing the player to pass right through them if they time their passage through the clock gears correctly. If the player gets stuck in one of the clock gear's teeth or inside one of their holes however, the player will literally be flattened by the pressure, causing them to lose Rings and slow down temporarily. There are also exhaust pipes hanging from the ceiling along the racetrack that periodically release exhausts. Should the player get caught under the exhaust of these pipes, they will be flatten, take damage, and slow down temporarily.

After a while, the road will transform into a left-turning sandy road which has moving sand spots on the left side of the road. After that, the road will head downward until the player gets underneath the pyramid. From here, the player will enter a section with damage-inducing exhaust pipes in the ceiling. In this section, the player has to make a sharp turn to the left, then the right, and then the left again. Worth noting is that the sides of the road in this section are covered in speed-reducing splashed water. After getting past the last turn, the player then has to pass through the holes in a giant clock gear gate. Alternatively, when first getting underneath the pyramid, there will be a wooden ramp that the player can use to reach another ramp which leads straight to the giant clock gear gate. These ramps significantly shortens the trip through this section.

After passing through the giant clock gear gate, the player will enter a simple pyramid corridor, which has moving sand patches on both the left and right side of the road every now and then. Eventually though, the road makes a turn to the left, from where it will head straight to the finish line.

Clockwork Pyramid also has its own mirror image version of it where the left and right sides are interchanged. 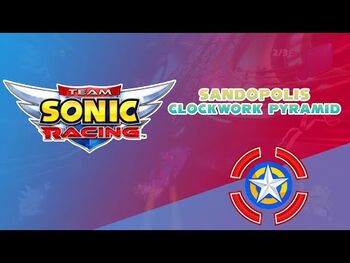