I didn't know I was missin'.

Cliff is a character from Sonic Boom who appears in the Sonic Boom series. He is an anthropomorphic animal and the respected and trusted elderly statesman of Hedgehog Village.[1] An archaeologist by profession, he knows the history of Lyric the Last Ancient and his metal army[1] and is the head of the excavation expedition to uncover the ruins of the Ancients.

Cliff was originally intended to be an inventor by Big Red Button Entertainment. However, because it violated Sonic Team's guidelines that only Tails and Eggman could be inventors in the Sonic Boom continuity, that concept got scrapped, and Cliff ended up becoming an archeologist.[2]

Cliff is an anthropomorphic animal slightly taller than Knuckles. He has long arms and legs with buff-colored fur, white fur on his front torso and blue eyes. He has a medium-long muzzle covered in long white fur, resembling a beard, a black nose similar to Sonic's, white bushy eyebrows and several hair strands reminiscent of hedgehog quills with white tips. His attire consists of a beige cowboy hat with a black band, a grey bandanna, brown gloves and dark grey boots with black straps and white cuffs. Around his waist he has a dark grey belt with a pocket and rope.

At some point, Cliff got to know Amy and her team, though the knowledge of each party was not mutual.

Having been searching for the Ancients' civilization for a very long time,[1][3] Cliff lead an expedition to an excavation site where he and his workers worked tirelessly to learn more about the Ancients' civilization.[3] Supposedly, Cliff found Q-N-C during the excavations and became his friend.[4] Cliff later met Team Sonic who provided the group with info on Lyric's backstory upon their inquire. Hearing that Sonic had accidentally released the genocidal Ancient from his eternal prison, Cliff gave Team Sonic a plan of action: Lyric needed the Chaos Crystals for his plans, so they just had to get them first. Proving the team with clues to start their search, Cliff assigned Q-N-C to help Team Sonic.

While helping the team search for the Crystals, Cliff dug out the Tornado and told Q-N-C where to find him. When Team Sonic found him, Cliff helped bring them to Bygone Island were in the Tornado where the remaining Crystals. Cliff later joined the Unnamed Village's celebration of Team Sonic after they stopped Lyric, where he praised Sonic's efforts. Sonic, however, noted that they did it together.

Cliff is nice, well-educated and wise, though at times absent-minded. While usually very calm and level-headed, he can nonetheless be comically stunned by unexpected news, as hearing about Lyric's release left him shocked for several seconds. When on a lookout for something, he will fulfill his search anyway he sees fit.[1]

Cliff is a very wise individual with extensive knowledge about the Ancients and their civilization. He also has some piloting skills, as he was able to effortlessly pilot an Ancient aircraft to Bygone Island.

Cliff is good friends with Q-N-C, a robot he whom he befriended after finding him during the excavation. Cliff himself refers to Q-N-C as his "buddy" and has enough faith in him to have him serve as Team Sonic's guide for their mission to stop Lyric.

"You saved a lot of people."
—Cliff praising Sonic for saving the world, Sonic Boom: Rise of Lyric 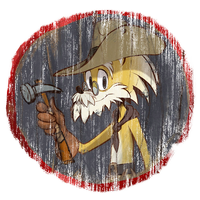