The steep roads of Central City.

City Escape is the first stage of the Hero story in Sonic Adventure 2 and Sonic Adventure 2: Battle, and is playable as Sonic the Hedgehog. It also has a two-player battle mode where other characters are playable.

This stage takes place on the streets of the capital of the United Federation, Central City. This can be proven by the fact that the cutscene before the stage says, "Above the capital city," and G.U.N. soldiers in Shadow the Hedgehog mention Central City as being the capital.

The game begins with Sonic the Hedgehog escaping from a G.U.N. helicopter, fleeing from the military organization's pursuit. He is falsely accused of stealing the Chaos Emerald that Shadow the Hedgehog stole from Federal Reserve Bank.

City Escape features regular Sonic, and Shadow, gameplay, as well as a brief snowboarding section at the beginning.

The stage begins with Sonic riding down the hills using a flap he ripped off of a G.U.N. helicopter. When Sonic jumps off the flap, he is introduced to Omochao, a robotic Chao that acts as a guide to help the player throughout the levels. Then, after fighting many enemies and going down Rails, Sonic is pursued by a massive GUN Military Truck, chasing him to the end of the level until it crashes into a brick overpass as Sonic reaches the Goal Ring.

This mission is very easy due to the number of Rings located during the first part of the stage. Additionally, there are few G.U.N. robots in the level that will cause Sonic to lose Rings.

The player must find Sonic's Mystic Melody before they can complete City Escape's third mission. The Ancient Ruin is found near the bottom of the building Sonic runs down. The player must then play the Mystic Melody beside the Ruin to make a Spring appear. Then, by using this Spring, the player will reach a Pulley. By jumping to the next Pulley, the player will be facing a Mono Beetle. They must use the Homing Attack, but hold down

, to get a high bounce off the robot. This is done three times, but the third robot is a Spark Beetle that has an electric field around it, so the player must wait until it is lowered before jumping at it. They can then grab the Swing Bar and flip into the air, directing Sonic into the alcove where the lost Chao is located.

This is a very strict time limit to complete the stage. In the first section of the level, the player must avoid hitting any cars, as they slow Sonic down, and use all of the Ramps to increase his speed. Afterward, the player must take off running and use every Rail to increase speed, especially the one in the building with the stairs and two long Rails. The player should not waste any time fighting G.U.N. robots and collecting Item Boxes. During the large run down the building, it helps to build up the Spin Dash and allow Sonic to roll down the building at a greater speed. During the GUN Military Truck chase, Sonic must simply evade any hindrances that can slow him down. There are no Point Markers in this mission.

Hard Mode is not much different besides the increased number of enemies. However, there are two notable changes about City Escape in Hard Mode. The first is that after the snowboarding section, the stairway is blocked off by a gate, meaning that Sonic must jump higher to grab a ledge and pull himself up. The second change is that after the section where Sonic runs down the building, there are no longer floating platforms to jump on and Sonic must now Homing Attack a Mono Beetle and use the Light Speed Dash in order to reach the other side. Otherwise, the rest of the level is the same as in normal mode, including the GUN Military Truck chase.

The Level Up Item in City Escape is the Magic Gloves, which allows Sonic to use the Magic Hands technique.

This Level Up Item is found shortly after running down the side of the building. Sonic must already possess both the Bounce Bracelet and the Flame Ring to access it. At the four Steel Containers found a short distance from the base of the building, the player must use the Bounce Attack to access the room with the item.

In the GUN Military Truck chase section, Big can be seen running along the right side of the last stretch of road before the truck crashes. He panics and then gets run over by the truck. 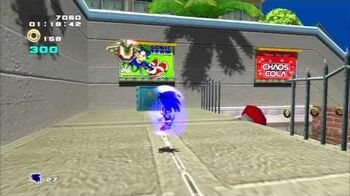 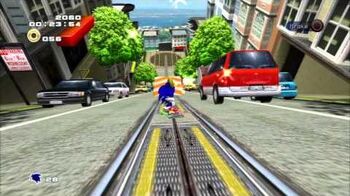 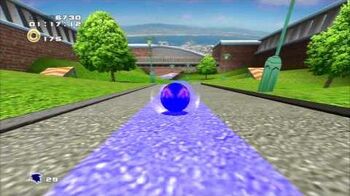 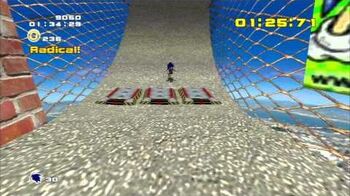 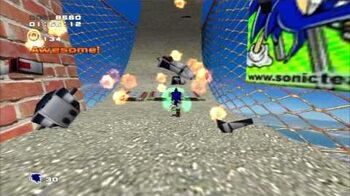 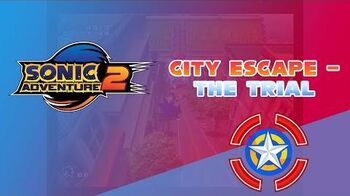