A Chopper, from Sonic the Comic #59. Art by Mike Hadley and John M. Burns.

The Chopper is a character that appears in the Sonic the Comic series published by Fleetway Editions. It is a piranha-based Badnik variant created by Dr. Ivo Robotnik. They are among the first generation of Badniks produced by Robotnik which patrol the waters of the Green Hill Zone.

Based on piranhas, the typical Choppers have a red mechanical body with a gray dorsal fin and fishtail and yellow/gray pelvic fins. They also have a large yellow jaw with serrated teeth which they flash at all times, black eyes, and stubby yellow spikes on their sides. Early Choppers were completely blue however.[1]

The Choppers first appeared in the Green Hill Zone where they to their distress saw Sonic the Hedgehog coming right at them, smashing them as he passed by.[1]

Much later, the Choppers had to share their Zone with the Badniks from the Palmtree Panic Zone. When they arrived however, they began destroying the residential Badniks, refusing to live alongside outdated models. A wounded Chopper escaped the carnage with the help of B.A.R.F. who subsequently used its parts to create the Seven Badniks, namely the Choppalien.[2][3][4]

The Choppers by Woodrow Phoenix. 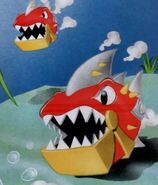 The Choppers by Ferran Rodriguez.
Add a photo to this gallery

Retrieved from "https://sonic.fandom.com/wiki/Chopper_(Sonic_the_Comic)?oldid=1911982"
Community content is available under CC-BY-SA unless otherwise noted.