Chemical Plant, from the console/PC version of Sonic Generations.

An industrial facility with poisonous chemicals.

This Chemical Plant feels familiar. I'd never forget a smell like this! And that pink water makes me really nervous for some reason.

Chemical Plant is a large chemical facility. The stage is designed in accordance to the original Chemical Plant Zone, though the scenary of the stage is much larger in proportion to Sonic's size. There are no signs of nature here, and the stage in general is covered by machines, silos, gigantic gilders, and related structures; all of which are underneath a dark sky that is covered by crimson clouds. The platforms here consist of large metallic surfaces with warning signs and tubes of different colors adorning them, as well as large tubes carrying chemicals with yellow platforms on them to stand on. A few parts of Chemical Plant also feature yellow cubes that float in groups, and some parts of the stage are flooded with Mega Mack.

In Chemical Plant Act 2, there is a point where the whole facility begins exploding, with many buildings leaking poisonous gases or having caught on fire.

After the Sonics have finished restoring the facility, Amy Rose, who had been turned into a statue by the Time Eater, is turned back to normal as well.

Overall, Chemical Plant is a very fast-paced stage with many alternate paths to take.

Chemical Plant Act 1 includes various gimmicks from the original Chemical Plant Zone. While they all retain their original functions, most of these gimmicks have been slightly modified to include a few more features. Some of these gimmicks include the yellow blocks that float around in groups, tubes that spill blue chemical balls, Mega Mack, and high-speed warp tubes.

Chemical Plant Act 2 uses gameplay elements from the Xbox 360/PlayStation 3 version of Sonic Unleashed. Most of the stage is in 3D, though there are a few 2.5D sections as well. While the 2.5D sections work the same as in Chemical Plant Act 1 for the most part, the 3D sections have various obstacles added to them. Also, some of the original gimmicks have been slightly modified. Examples of which include making the surfaces the player can stand on much wider to prevent Modern Sonic from falling off, and the addition of Grind Rails, Jump Ramps and Pulleys.

Classic Sonic starts out next to two roads that lead a quarter of the way into the Act. They will then lead into a new place: a mechanical room with machine claws controlling the place. This will lead to the shaft with the rising Mega Mack from the original Chemical Plant Zone. When escaping the rising Mega Mack, the player will run through a loop, which will lead to the Goal Plate.

Modern Sonic starts starts out by running down two parallel paths with Freestyle Trick-inducing gimmicks and special Ramps. Both the high and low path will lead Sonic to a large tube, sending him skydiving down a shaft with blue chemicals flying about. After he lands, Modern Sonic will run into a room where the Mega Mack is beginning to rise (just like in Act 1), but deeper and slightly quicker. When escaping this area this time around, the Chemical Plant will begin to self-destruct. After that. Modern Sonic must proceed to the Goal Ring to escape the destruction behind him. 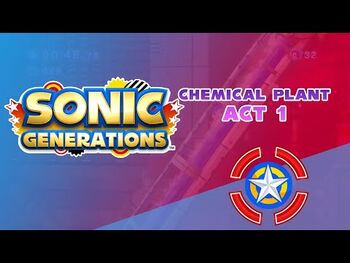 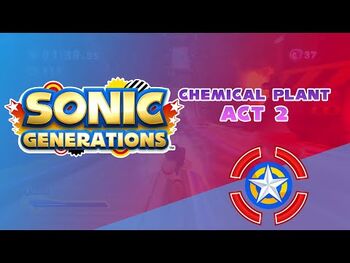