A plant filled with machinery and dangerous chemicals.

According to Rouge, there should be a database somewhere. We have to locate the building it's in. There's a lot of ground to cover, so just finding it will be a chore.

Chemical Plant (ケミカルプラント, Kemikarupuranto?) is the eighteenth stage in Sonic Forces, and the fifth stage in the game to be played as Classic Sonic. This stage is a re-imagining of the Chemical Plant Zone from Sonic the Hedgehog 2 on the Sega Mega Drive.

One of Dr. Eggman's many chemical plants, this facility is an industrial high-tech maze located in the frigid north of Sonic's world. During the events of the game, Classic Sonic and Tails infiltrated the Chemical Plant to get some info on the Phantom Ruby.

Chemical Plant is reminiscent of the original Zone, but is placed inside a closed-off industrial centre that is entirely mechanical. This facility stretches as far as the eye can see into the background, which is filled with giant pumps, chemical containers, pillars, blocky structures akin to buildings, chemical tube systems, rotating cylinders filled with blue goop, and rails carrying cargo. There is also a thin red haze that fills up the background.

The stage has interwoven yellow pipelines with blue chemicals flowing through them that both appear in the background, and serve as roads for the player in the foreground. Many objects in this stage are also marked with yellow and black hazard stribes.

In the foreground, the routes are plated with yellow-colored metal along the edges. These routes move between the various structures and along the pipes. There are also thin yellow pipes in the foreground with red chemicals flowing through them. Finally, the bottom section of the Chemical Plant is flooded with a pink substance known as "Mega Mack".

With Operation Big Wave having been foiled by the Phantom Ruby and Infinite, Knuckles debriefs the Resistance on their situation. While everyone is brought up to speed about the Eggman Empire's Phantom Copy army, Rouge reveals that she has discovered that Eggman has his database stored in the Chemical Plant. In an effort to stop the Eggman Empire's greatest weapon, Classic Sonic and Tails head for the Chemical Plant to find Eggman's database and extract information about the Phantom Ruby that the Resistance desperately needs to avoid Infinite wiping the floor with them again next time they attack Metropolis.

Infiltrating the Chemical Plant, Classic Sonic starts looking for the building that the database is in under the guidance of Tails. During the search though, Tails notices that the surroundings are a little too quiet. True enough, the levels of Mega Mack soon start to rise, prompting Tails to tell Classic Sonic to stay sharp.

Eventually, Classic Sonic and Tails find the database. Getting his hacking on, Tails shifts through Eggman's personal data, and soon finds a file on the Phantom Ruby. From it, Tails learns how the Ruby manipulates virtual reality and how Eggman incorporated a prototype into Infinite, which is the source of the jackal's strange powers. He also finds a piece of information that shows that the Phantom Ruby has a weakness...

Like the original Zone, Chemical Plant has yellow-clad pipes filled with blue chemicals that spiral through almost the whole map. These pipes can have very steep drops and may climb after a drop. There are also collections of yellow/purple squares that move back and forth periodically. These blocks' arrangements constantly change, and can crush Classic Sonic against a surface. The player must use these blocks to scale vertical shafts, which requires a knowledge of the game physics and quick reflexes.

Chemical Plant has the original Zone's high-speed warp tubes, miscellaneous terrain features for quick transport. Usually, the player needs to destroy the lid seal on them first though. These tubes' exits will also seal themselves up with a Spring after the player passes through them (to prevent backtracking).

Being a Classic Sonic stage, Chemical Plant is played entirely from a 2.5D perspective, and include Item Boxes for Classic Sonic to utilize. In addition, there are invisible Springs that only show themselves when the player steps on them. It also brings back the classic means of surviving for long periods underwater using Air Bubbles, along with the classic warning music when Classic Sonic is about to drown.

At the start of Chemical Plant, one must proceed down the path ahead. By running down this path, the player will build up speed. Eventually, the path will end with a ramp-like slope that launches Classic Sonic into the air. If the player can land on the edge that appears at the apex of that jump, they can take a shortcut up to a silver-colored Egg Pawn. Should the player fail to reach that edge, they must up there from the bottom of the aforementioned slope.

After the silver-colored Egg Pawn, the player can either use the Jump Panel behind it or follow the path. Regardless, each of these routes leads to one of two high-speed warp tubes. While both of them lead to routes that lead to the first underwater Mega Mack section in the game, the former route option is longer and more tricky while the latter brings the player to the end of said underwater section.

If the player lets launched upward through the shaft after the first Star Post, they can also take the path on the right, which will lead straight into a section where the Mega Muck levels will suddenly rise. If the player cannot make the leap from the slope though, they must take the longer and more dangerous route along the bottom to reach the section with the rising Mega Mack.

In the section with the rising Mega Mack, the player must climb to the top of the shaft in the area. From there, cross the Mega Mack pool on the left and follow the path from there across different gabs until Classic Sonic reaches another Mega Mack pool. Cross this pool to reach the Goal Plate. 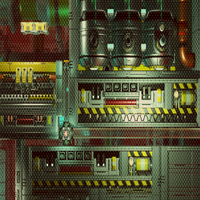