For the character in Sonic X, see Charlie (Sonic X).

You're a menace. I'm not gonna let people like you cause problems for me anymore!

Charlie is an antagonist that appears in the Sonic Boom series. He is an anthropomorphic desert rat from Hedgehog Village, Belinda's husband, and an enemy of Knuckles the Echidna.[4] A former archaeologist, Charlie turned to a life of villainy after Knuckles made him lose his job and ruined his life with his buffoonery.

Charlie is a lanky anthropomorphic desert rat with green eyes and light blue fur. In terms of height, he is more than a head shorter than Knuckles. He has short cheek tuffs, small round ears on top of his head, and a light peach medium-long muzzle with a black nose. He also has long fur on his head arranged in a comb over and a long tail with a tuff on the tip. His attire consists of a white shirt with pens in the left chest pocket, square black glasses, white gloves, gray socks, and beige shoes with gray soles.

Years ago, Charlie worked for the Fennec Shopkeeper, but got fired thanks to Knuckles' constant foolery with the inventory. He later found a new job at Mr. Slate's dig site for some Ancient ruins and made himself a good life with his wife, Belinda.[5]

When Charlie met Knuckles again years later, the echidna wanted to make amends for what he did. While Charlie assured him that it was in the past, Knuckles stubbornly persisted. However, Knuckles' attempts to make up for what he did cost Charlie his job, his home and his wife. Driven mad, Charlie swore vengeance. Restoring an mech weapon from his old dig site, Charlie began bullying Knuckles with his newfound power until the echidna fought back. Although Charlie was beaten and a (fake) truce was made by Belinda, he had now won back his wife's admiration and gotten a new job as a supervillain.[5]

Answering Dr. Eggman's call to a meeting, Charlie met up with the other local villains and rogues at Eggman's lair where Eggman revealed that he had gathered them to form a team to destroy Team Sonic. After some arguments over leadership and team exercises, Charlie wanted Eggman to lead them after Shadow the Hedgehog had left the group criticizing them. Attacking Team Sonic, Charlie helped Eggman and Giant Robot face Sonic after separating him from his team. However, Charlie was beaten when Sonic knocked his mech into Giant Robot, short-circuiting them both.[6]

Charlie eventually returned to battle Sonic and Knuckles, but retreated after Sonic damaged his mech suit.[7] After breaking some rules, Charlie was forced by law to get a permit for committing evil. To do so, Charlie had to take an exam, which he passed, although the law was soon rendered null and void.[8] Charlie was later with Belinda when they met Knuckles, who was looking for a foster family. Following Belinda's plan for revenge, Charlie let Knuckles into his family and used his vulnerability to bond with him, before convincing Knuckles to become his fellow villain. Charlie later attacked Team Sonic with his mech and Knuckles, but when he began using Knuckles as a shield, the echidna chose to rejoin his team and help beat Charlie, who retreated with Belinda.[4] Soon after, he would vote in a referendum for a new name for the Unnamed Village.[9]

Seeking a weaponized flight harness from the Ancients to give to Belinda as her anniversary gift, Charlie worked on excavating it from a ruin. As such, he declined Belinda's offer to attack Hedgehog Village with her while the Village was vulnerable. When Belinda returned, Charlie gave her the flight harness and explained what he had been up to. With Belinda loving her gift, Charlie looked forward to do more evil with her while she tried out her gift.[3] When local gossip then revealed that Dr. Eggman was no doctor, Charlie began seeing him as a joke. He thus joined the villagers in mocking Eggman during the scientist's next trip to the Village. Charlie soon after joined Professor Kingsford's Evil Science class to get a doctorate. Over the next eighty-seven weeks, he witnessed his fellow student Eggman face continuous failures and ruin Charlie's point grade average. However, Charlie failed the final exam by not cheating (unlike Eggman).[10]

After being beaten by Sonic again, Charlie went to Meh Burger. There, he shared his frustrations with Eggman over a meal. However, Eggman left when Charlie brought up his wish to beat Sonic with the lost Tummel Crystal, which could power any mech suit.[11] Charlie later went to the Villain Retreat where he had some rest and relaxation.[12] After that, he would attend Amy's anger management class.[13]

Charlie is usually a mild-mannered guy taking diligent pleasure in his work. Originally, he was avoidant and not much for confrontations. As such, he was unwilling to stand up for himself when mistreated, and allowed people to walk over him. He was also not one to carry around grudges for long and was willing to forgive past transgressions. Even when angered and pushed around, Charlie would suppress his frustrations in a passive-aggressive way.[5]

After losing his job, his home and his wife, Charlie suffered a nervous breakdown that drastically changed his worldview. Growing aggressive, vindictive and vengeful, he became an unreasonable and sadistic bully who picks on his victims mercilessly.[5] His attitude towards others also changed radically, as he would begin holding long-time grudges at his foes.[4] Nowadays, his ambition is to receive recognition by unleashing a reign of terror on Hedgehog Village that he will be remembered for by the next countless generations.[3]

On a positive note, Charlie would become much more confident and assertive following his turn to villainy. Having sworn to never let anyone wrong him again after becoming a supervillain, Charlie shows no hesitation to seek strife against those who have wronged him, and will fight dirty if needed.[5] However, Charlie is also a dedicated husband, even after becoming a supervillain; most noticeably, he put aside the perfect opportunity to have his villainous dreams come true in order to get the perfect gift for his wife. Also, despite his growth, his former submissive attitude tends to resurface when he is faced with his wife's wrath.[3]

Charlie is an accomplished archaeologist, having unearthed and fully restored many millennium-old and shattered artifacts, including an old weapon from the Ancients.[5]

Charlie wields a powerful mech suit from the time of the Ancients which he stole from a dig site. This weapon raw strength lets him fight on even grounds with the likes of Knuckles. It can also fire energy beams that can either immobilize or blow away opponents. At first, Charlie had trouble controlling it, but he has since mastered it.[5] However, he still has trouble using it for more delicate operations.[11]

Charlie's arch-nemesis is Knuckles the Echidna, whom he holds responsible for the losses of his past jobs and for nearly ruining his marriage.[4] During the early stages of their relationship, Charlie did get frustrated over how Knuckles' foolery affected him, yet he always suppressed the anger he had for him. However, after Knuckles nearly ruined his life, Charlie finally snapped and gained an explosive hatred for the echidna. He subsequently became a super villain and made it his mission to torment Knuckles as revenge.[5] He thus gets really mad when Knuckles, in his stupidity, cannot remember him. Despite being evil himself though, Charlie thinks of Knuckles as a menace and a "demon incarnate". Regardless, he remains aware of Knuckles' low intelligence, which is an endless source of frustration for him.[4]

While Charlie hates Knuckles with a passion, Knuckles is responsible for making him start standing up for himself, which ironically changed his life for the better.[5] Also, while Charlie cannot stand Knuckles' company, he is willing to endure it for the sake of his schemes.[4]

Charlie is very fond of Belinda, referring to her as "sweetheart" and "honey," even though they have their fair share of arguments. There is also a strong contrast between them in their relationship, with Charlie being reserved and meek towards Belinda and Belinda being assertive and outgoing. Charlie in particular appears to be very uncomfortable about disappointing Belinda and gets very submissive towards her when she threatens him with her wrath. Despite this, he genuinely loves his wife.[3][5]

Belinda leaving him was the final straw that pushed Charlie over the brink into villainy, showing that she means a great deal to him. However, Charlie would win her back by proving his newfound assertiveness after becoming a villain. In turn, Belinda would fully support his new career choice with an evil glee by faking a truce with Knuckles.[5]

Since Charlie became a supervillain, Belinda has acted as his partner in villainy. While Charlie provides the muscle with his mech suit, Belinda provides him with plans and tactics to use. In addition, she helps rein Charlie in when his anger gets the better of him.[4] Charlie would in turn back up Belinda's decision to join his evil career by eventually getting her a weaponized flight harness that let her be just as active a supervillain as he is, a gesture of which made them closer than ever.[3] 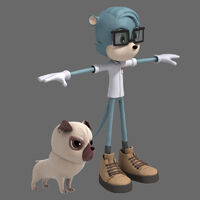