The negative chaos energy of the seven Chaos Emeralds and Greenbots.

I'd like to think of this as my very own form of "Chaos Control!"

Chaosbot[1] is a transformation that appears in the Sonic X comic series published by Archie Comics. It is an alternate form of Perfect Chaos modified with Dr. Eggman's technology.

Chaosbot appears nearly identical to Perfect Chaos but due to Eggman's Greenbots being merged with it, Chaos receives a white/green/yellow armor-like plate attached to its body.

Since Doctor Eggman could not control Chaos, he combined his "Greenbots" with it, allowing him control of it,[2] thus sending Chaosbot to attack Station Square. Sonic and his friends tried repeatedly to remind Chaos of its old life to snap out of Eggman's control although their attempts failed. Despite this, Chaos was able to temporarily come to its senses and gave the hedgehog the Chaos Emeralds, allowing him to transform into Super Sonic.[3]

Super Sonic then engaged in a tough battle with Chaosbot although he stood no chance against the latter due to Chaos being a composition of pure chaos energy, which was more powerful while under Eggman's control. However, Sonic managed to destroy Eggman's remote control. Coming back to its senses again, Chaos knocked Eggman away while Sonic destroyed the control bots, allowing Chaos to revert to normal.[3] 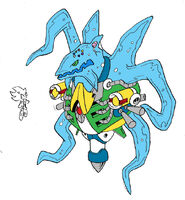