Chaos energy[1][2] is a force that appears in the Sonic the Hedgehog film series produced by Paramount Pictures and its spin-offs. It is an extraordinary and powerful form of energy generated by certain alien creatures. It allows its wielders to enhance their physical skills.

The term "chaos energy" originates from writer Kiel Phegley's work on Sonic the Hedgehog: The Official Movie Novelization. According to Phegley, the term was added as a purely thematic easter egg. When he wrote the novel, he wanted a way to express how Sonic felt in his head about being chaotic and out of control, so he added the term as a nod to the classic Sonic games.[3] When later writing Sonic the Hedgehog 2: The Official Movie Pre-Quill, the term was added as a minor extension of his work on the novel.[4] He further added that the crew behind the Sonic the Hedgehog film series could easily change the usage of the term in the future.[5]

Chaos energy refers to an extraordinary, chaotic, and highly potent form of energy that is generated inside of certain individuals of great power. As seen in Sonic and Knuckles' cases, their chaos energies manifest as a vast and highly potent form of bio-electromagnetic energy that takes the appearance of an electric aura of some sort that has surges around it. The color of the chaos energy depends on the user; Sonic's is blue while Knuckles' is red.

The properties of chaos energy are not clearly defined. However, it is incredibly powerful; when Sonic's chaos energy got built up once, it displayed enough power to release an electromagnetic pulse that expanded beyond Earth, eventually reaching Tails' home planet. Users of chaos energy can harness their own chaos energies to enhance their physical attributes, such as speed and strength. Furthermore, it can also serve as a power source for machines, being capable of supercharging them and providing them with nearly unparalleled power boosts. Chaos energy-wielders like Sonic, or just one of his quills, can as well generate an unlimited amount of chaos energy. In addition, chaos energy seems to be generated excessively when the wielder feels strong emotions.

Chaos energy-wielders can leave behind residues of their chaos energy in objects they come into contact with. Furthermore, residual chaos energy can remain in existence for at least a decade. Different chaos energy signatures can as well be traced across an entire galaxy.[2]

A decade ago, Longclaw took care of Sonic the Hedgehog, a being with powers over chaos energy that were unlike anything Longclaw had ever seen. It was Sonic's chaos energy that drew the echidnas to come after him in an attempt seize his powers for themselves, which led to Sonic's escape to Earth.

While playing baseball with himself, a frustrated Sonic would run around, his chaos energy building up as his anger over his loneliness intensified, until he released it in a form of an electromagnetic pulse that covered the entire Pacific Northwest, which caught the attention of the United State's government. A few days later, during car chase with one of Dr. Robotnik's Badniks, Sonic's chaos energy began fluctuating again due to his anger over Tom Wachowski's decision to leave Green Hills. However, he ended up putting his chaos energy to use when he accidentally got sent flying into the pursuing Badnik with a chaos energy-fueled spin attack, destroying it. In the meantime, Robotnik learned how to harness Sonic's chaos energy for his Eggpod by using one of his quills as a battery. Later, when cornered by Robotnik's Eggpod in Green Hills, Sonic unleashed his chaos energies again after hearing Tom declare him his friend. Having gained control over his chaos energy now, Sonic used it to defeat Robotnik and sent him to the Mushroom Planet.

For his plan to attract someone to the Mushroom Planet that he was stranded on, Dr. Robotnik would hook Sonic's chaos energy-infused quill up to an energy beacon he made made from Eggpod parts. This created a vast pulse of chaos energy that knocked Robotnik out and spread far into space. Attracting the attention of Knuckles, he quietly tapped into his chaos energies as he met Robotnik.

Sonic the Hedgehog: The Adventures of Sonic & Donut Lord

While playing baseball by himself, Sonic accidentally generated so much chaos energy that he created an massive electromagnetic pulse that drew the attention of Dr. Robotnik. Later, when cornered by Robotnik's Eggpod in Green Hills, Sonic unleashed his chaos energies again after Tom and Maddie declare him his friend. With this power, Sonic defeated Robotnik.[6]

While working on stopping a robbery in the first bank of Walla Walla, Washington, Sonic made use of his chaos energy to break down a bank vault door.[7]

Knuckles the Echidna later utilized his own chaos energy to break free of his energy shackles and then used it to deliver a devastating blow punch on his giant alien monster opponent in Casino Night.[8] 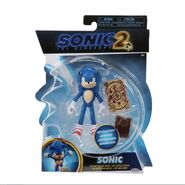 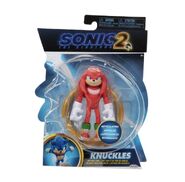