Sonic News Network
Register
Don't have an account?
Sign In
Advertisement
in: Adventures of Sonic the Hedgehog objects, Emeralds, Rings

"Fast and Easy" (only appearance)

A green emerald cut gemstone set into a golden ring.

The Chaos Emerald Ring is an object that appeared in the Adventures of Sonic the Hedgehog television series. It is regarded as the most powerful Chaos Emerald on Mobius.

The Chaos Emerald Ring's power is apparently dormant until it is plugged into a pedestal in the "Secret Zone" deep into Mobius. Once its power is unlocked, its user is seemingly capable of doing anything, such as sinking one-hundred square miles of land into the ocean. 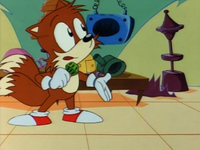 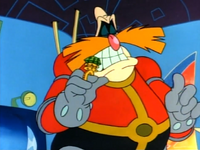