"Chaos Emerald Chaos" is the fourth episode in the anime series, Sonic X. It first aired in Japan and the United States on 27 April 2003 and 27 September 2003 respectively.

The scene briefly touches upon a construction site, which happens to be the hiding place of a Chaos Emerald. The episode then turns to a new scene where the President, the Director of Central Intelligence and Jerome Wise are discussing the whereabouts of the new visitors from another world. They have been able to pin-point the location of Sonic and his friends (except for Knuckles, who went off on his own) and are determined that Dr. Eggman has surfaced on an island in the Southern Sea. The President originally tells the director to go out and stop them all immediately. However, the director responds that it would be in their best interest to not act out of haste and wait until they have more information on these people. The director tells him that Dr. Eggman is already being monitored by the Southern Sea police patrol. At Dr. Eggman's fortress, a small wooden boat lands on the island with one undercover agent signalling a lighthouse that he has successfully reached the area. The President asks about Sonic and his friends and the director replies that he has sent an "undercover agent" to watch over Chris with whom Sonic and his friends seem to be accompanied with.

The next day at Station Square Elementary School, Chris' friends, Danny and Frances, are discussing about Sonic when Mr. Stewart walks in on Chris' class with the principal. The students are given the announcement that Mr. Stewart will be their new teacher for the remainder of the semester and the class proceeds. After the school day is over, Mr. Stewart stops in front of Chris and asks if he's the son of industrialist Nelson Thorndyke and film actress Lindsey Flair, which Chris says he is. He feels privileged to meet the son of such distinguished parents and then asks what Chris' favorite animal is, to which he replies "Hedgehogs".

Back at the construction site, an excavator has struck the Chaos Emerald head-on and has begun to go out of control. It rides around the area and proceeds to destroy the equipment and vehicles. The machine eventually stops just as suddenly as it began. The next day, Scarlet Garcia reports that a construction crew has found a mysterious gem that radiates "highly charged" energy. The cause of the static on all of the TVs is reported to be the energy from the emerald. They have not removed it yet due to the possible danger of doing so. Cream and Cheese, who happen to be watching the news, spot the drawing of the green Chaos Emerald that Scarlet is holding up. Cream and Cheese quickly run outside where Sonic is resting on a tree branch. They tell him that there is big trouble.

Meanwhile, Dr. Eggman is watching the very same news report. He grins and tells Decoe to bring him his cards. He inserts them into the Selection Machine and draws up E-11 Beacon. Eggman and Beacon set out with the government agent overseeing them. Meanwhile, Tails and Amy hop on the Tornado 2 and prepare for takeoff in search of the Chaos Emerald. Sonic had already headed out by himself to reach the top of a pole to wait for Tails and Amy. Dr. Eggman is flying over the ocean in his Egg Mobile with Beacon when he gets word from his radar that missiles are heading in his direction. He turns around and notices them heading his way. Eggman is unfazed, however and is actually quite excited. Beacon flies around the missiles and lures them into the sea and Eggman is heavily disappointed. At that point, they set off into the city.

While sitting in class that day, Chris looks through the window and sees the Tornado 2 fly by. He gasps and realizes that trouble is ahead, proceeding to leave the class. Stewart is more than suspicious and decides to follow him, telling the class to study on their own. Chris skates across the streets and spots the Tornado 2 flying overhead, with Stewart tailing Chris in his car. Tails and Amy finally reach Sonic's location, which prompts Sonic to get up and head towards the area where the Emerald was spotted. At that exact area, the news crew is talking amongst themselves before they spot Eggman and E-11 heading towards them. The citizens begin to run away in a panic. Sonic stops on one of the rooftops and sees the large crowd. He then turns and notices Eggman flying across the area, which prompts him to smirk and head after the doctor.

It doesn't take long at all for Eggman to realize he's being chased by Sonic. Eggman sends Beacon after Sonic while he tends to the Chaos Emerald. The robot rams into Sonic and starts playing with him in the air and the hedgehog is defenseless against this. Tails and Amy fly by and see the situation at hand. Amy tosses him a Ring, saying that he should be able to win with it. Sonic tries a grab it, but misses and plummets to the ground below. Tails and Amy then head after him to get closer to the situation. Meanwhile, Eggman lands at the construction site and digs for the Chaos Emerald. He spots it in the dirt and proceeds to collect it, but is beaten to it when Chris picks it up right before him. However, Eggman quickly snatches it in surprise and gets into his Egg Mobile in an attempt to fly away with it. Chris doesn't want to let Eggman escape with the emerald and starts to fight Eggman to get it back. Eggman pushes him away and takes off with Chris grabbing the extension of the Egg Mobile, carrying him into the sky with Eggman.

Sonic continued to get rammed by Beacon once again as the robot continues to play with him. Beacon rams into him at such a force that launches him at a height. Tails flies to the flying hedgehog and Amy passes another ring to Sonic. Sonic grabs it and spins right through the robot, destroying it. Sonic then hears Chris' screams and seeing Eggman flying across the area with Chris hanging on to his Egg Mobile. He immediately chases after them. Chris manages to climb onto the Egg Mobile and tries to grasp the Chaos Emerald. Eggman tilts the Egg Mobile in an angle and although Chris almost falls from the craft, he grabs Eggman's mustache. Eggman quickly throws him off afterwards and fixes it, only to shortly realize that his Chaos Emerald is gone. Chris plummets to the streets below with the Emerald in his hand. Mr. Stewart sees this and drives to his location. He opens his car's hood and inflates the seats, attempting to break his fall himself. However, Sonic arrives in time and grabs Chris right before he hits the ground. Mr. Stewart sighs and decides to drive back to the school.

Back at Chris' house, the group looks over their prize, the green Chaos Emerald. Chris apologizes to Sonic for causing him trouble, but Sonic says that it's no trouble at all due to the fact that he was the one who recovered the Emerald for them. Chris is delighted by Sonic's approval and they all smile as the credits roll. 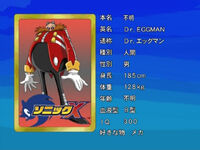 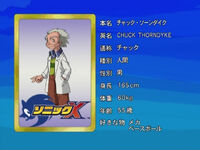