The Chaos Emeralds (カオスエメラルド, Kaosu Emerarudo?) are objects that appear in the Sonic the Hedgehog series. They are alternate versions of the Chaos Emeralds from another dimension set in the recent past. Like their counterparts, they are seven ancient emeralds with mystical powers.

The Chaos Emeralds are depicted as small gemstones with a simplified diamond cut design. The Emeralds come in the colors green, red, blue, yellow, purple, turquoise, and white.

Like their mainstream counterparts, the Chaos Emeralds are mystical gems that contain great amounts of chaos energy. The Chaos Emeralds' power can be harnessed with or without physical contact. When harnessed by living beings, they allow different chaos powers and can occasionally enhance the wielder's abilities. Harnessing all seven Chaos Emeralds will bestow a person with a Super State, a form that grants flight, invulnerability, different chaos powers, and increased innate talents. However, Super States generally do not last long, as they consume tremendous amounts of energy. The Emeralds' power can also be harnessed by machinery, such as robots, for the purpose of empowering them as well.

In gameplay, the seven Chaos Emeralds can be obtained in both Mania Mode and Encore Mode by clearing all seven Special Stages in each Mode. Within these stages, UFOs carry around their respective Chaos Emeralds. If the player collects all seven Emeralds in a Mode, their character can enter their respective Super State in normal gameplay. In Sonic's case, collecting all seven Emeralds in Mania Mode also allows the player to enter Egg Reverie Zone as Sonic, where the final boss of Sonic Mania is fought, after clearing Titanic Monarch Zone. Defeating the final boss will in turn unlock the true ending of Sonic Mania's Mania Mode. Similarly, collecting all the Chaos Emeralds in Encore Mode will unlock this mode's true ending, which will appear after defeating the Phantom Egg in Encore Mode.

In Sonic Mania Adventures, Sonic's absence prompted Dr. Eggman to look for the seven Chaos Emeralds to power up Metal Sonic with.[1] Eventually, he found four of them after digging around on Angel Island. The fifth one, which was in Sonic's possession, was later used by the hedgehog to lure Eggman into a trap the latter had set up for Sonic. The location of the last two Emeralds, however, were unknown to Eggman.[2][3] Eventually though, Eggman located the sixth Emerald on Angel Island and began excavating it, only for Sonic and Tails to claim it after they found and defeated him.[3]

In the Sonic the Hedgehog comic series and its spin-offs published by IDW Publishing, the Chaos Emeralds are the counterparts of the Chaos Emeralds from another dimension set in the recent past. Like their counterparts, they are seven gemstones that together grant ultimate power. Their past is nearly identical to their game counterparts', up until after the events of Sonic Mania. 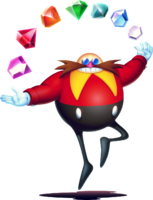 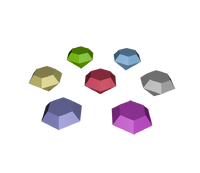