"Chaos Control Freaks" is the first episode of the anime series, Sonic X. It first aired on 6 April 2003 and 23 August 2003 in Japan and the United States, respectively.

The episode starts out in a forest at night time, as it shows Big the Cat and his pet frog named Froggy sleeping. Just then, an alarm is heard going off at a nearby tower switching on its lights. Sonic the Hedgehog runs towards the base whilst robots and the base defenses roll along the base preparing to arm themselves. The defenses begin shooting their bullets and missiles at Sonic but the hedgehog proves too fast for them to hit. As Sonic speeds closer to the base, some E-12 Behemoth robots activate and chase Sonic around. In an attempt to outrun them, Sonic runs past a spring which activates, launching Sonic into the air. However, whilst in the air, Sonic gets punched by an E-12 Behemoth, which sends him flying.

Miles "Tails" Prower and Amy Rose arrive on the scene in the Tornado 2 to try to help Sonic. As they are flying past the base defenses, they start shooting at the plane which results in the plane being shot before going up in flames. This leaves Amy terrified, but Tails wants to save Sonic and he shoots a missile revealing a Ring towards Sonic's direction. The Ring powers up Sonic who then destroys the robots with ease before making his way to Eggman's control room. Meanwhile, Decoe tells Doctor Eggman that the doors of the base have been closed and locked. Eggman complains that Sonic always interferes with his plans and responds that Sonic would always be determined to put a stop to his evil plans. As Eggman proves that Sonic is too late to stop him (in this case where all he has to is to insert a Chaos Emerald along with the other six emeralds into the Energy Amplifier machine in the center of the room), Sonic smashes into the scenery, much to Eggman's disgrace. After hitting some inputs, Eggman tells Sonic that he can't be stopped and all he has to press a button he's holding. Sonic taunts in response that Eggman should press the button before Sonic can grab it. Just then an E-13 Guardbot arrives who begins to attack Sonic around the room. Sonic manages to trick the robot into shooting the machine the Chaos Emeralds had been powering. The machine malfunctions and causes Chaos Control, warping everyone to another world, Earth.

The scene then cuts to Sonic, as he lays on the ground unconscious, until a truck rushes towards him. The hedgehog finds himself in the middle of a road filled with traffic. Because of this, the hedgehog becomes confused by his surroundings. People around are also stunned at seeing a blue hedgehog in return. The police arrive onto the scene, and as they try to catch him, Sonic is too stubborn and quick for them and takes off towards the highway. As a couple of police officers are driving down the highway sharing their excitement for capturing a blue hedgehog, Sonic lands on the police car, wondering how he can escape, before once again taking off to the roads. The police set up a roadblock covering a long range of the highway using cruisers, barricades, and large construction vehicles, but Sonic incredibly jumps over the entire roadblock. With no other option, the police send in their special high-speed unit, the Speed Team, consisting of five racers with Sam Speed as the leader. Confident as they walk towards their cars, the mechanics are finished with the maintenance of the cars before the team of drivers speed towards the highway.

Sonic is then seen sitting on a lamppost while staring into the night sky, noting that the sky remained the same compared to his world. He then thinks back to the beginning of the episode, remembering after witnessing Eggman's base being destroyed, they were warped to Earth. Sonic assumes that he has warped through time and space by the cause of Chaos Control while he shows concern if he is the only one in this new world without his friends. Just when Sonic jumps back onto the road, the Speed Team arrives. Sam Speed gets out of his car and talks with Sonic, who claims that the latter is hard to keep up with. Not feeling impressed, Sonic turns to leave but he is stopped. Sam then tells him that Station Square has been peaceful as the Speed Team have made only one arrest last year. Sonic smirks in amusement after hearing the story. Sam then explains the Speed Team's role and then he remarks at Sonic that he should consider who is the fastest before the rest of the Speed Team begins chasing Sonic as he takes off. With the Speed Team in pursuit of Sonic, the hedgehog mocks the Speed Team by claiming that the "S" stands for "slow-motion" before accelerating. The fellow Speed Team members accelerate to catch up with Sonic in an attempt to trap Sonic between the cars but Sonic avoids the stunt, toying around on another Speed Team member's car and then exceeds 300 km/h in reverse, much to Hector Dragg's dismay. Sam orders his team members to leave a gap on the center lane. As he refuses to lose to Sonic, he activates his Super Nitro, granting him to reach speeds over 500 km/h but even with that, Sonic surprises Sam by running at supersonic speeds, leaving the Speed Team in his dust.

However, Sonic is unable to stop himself before he runs off the end of an unfinished overpass. His speed is so great that he actually soars for awhile and triggers nearby wind turbines to spin faster, looking down at all the beautiful bright city lights. He then soars towards a mansion and is heading towards its swimming pool, much to the hedgehog's disgrace. Sonic attempts to run in mid-air to avoid landing in it but it is no use as Sonic inevitably falls into the pool, landing right in the center of the pool's floor. The sound of the splashes made by landing in the pool wakes up a boy (Christopher Thorndyke) from his sleep who heads out of the house to see what is happening. While Sonic is trying his best to hold his breath, he sees a ladder and tries to run towards it but the water drag is so great that he couldn't move at all. Just when Sonic thought it is over for him, Chris dives into the pool sticking out his hand to which Sonic clings on to and pulls him out of the water. Sonic is thankful to the rescue which surprises Chris and he eagerly introduces himself, asking for Sonic's name as he does so. 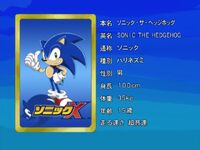 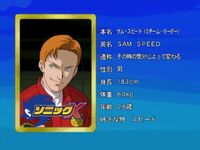 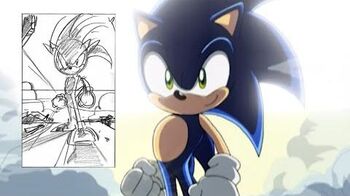