Cream and Tails in Chaos Angel, from Sonic Advance 3.

Chaos Angel (カオスエンジェル, Kaosu Enjeru?) is the seventh Zone in Sonic Advance 3. It is one of the parts of the earth that Dr. Eggman created when he broke the planet apart with Chaos Control.

Chaos Angel is located on one of Angel Island's many ancient ruins which seem to have been corrupted by Dr. Eggman's experiments with Chaos Control.

Chaos Angel is situated in high up into the sky, with various ruins decorating the place. The background has a pinkish sky with two moons of different sizes and a few stars. There are also some pillars in front of a purpleish gradient that are seem above a layer of blueish clouds. The platforms the player has to stand on are made of brown bricks with borders made out of white stone and patters of different colors. Due to decay, these elements are damaged and have moss on them, though this is pure decoration.

Chaos Angel is also set inside of massive, cathedral-like buildings. Their entrances are huge, with gray walls that have a geometrical pattern on them, as well as light gray, orange, and whiteish pillars that support them. The inside of these collossal, multi-story ruins are made out of blueish stone, and some walls have symbols written on them. Due to them being so huge, they are also supported by thick pillars and are illuminated by large torches.

After leaving Cyber Track, Sonic, Tails, Knuckles, Amy, and Cream continue their adventure in Chaos Angel to foil Dr. Eggman's plans. There, they find Eggman in the Egg Gravity, and are able to defeat him. The doctor and Gemerl flee the scene, while the heroes approach the Master Emerald's altar.

Acts 1 and 2 are structured in that the player will go inside the ruins and overcome hazards such as falling boulders and chambers with crushing walls, Gondolas and gimmicks such as spinning platforms that move when the player runs on them, much like metal nuts. The Seesaws from Route 99, and the crouching catapults from Twinkle Snow return, along with a sideways variant of the latter that the player must push. The outdoor areas are generally more sparse in terrain than the indoor areas and thus are rife with bottomless pits (this may be contributed to Eggman's separation of the planet. As such, unstable floating platforms are scattered around the outside areas almost everywhere). It is recommended to use a Flying type character, not only for the shortcuts, but also because one mistake could cause the player to plummet to their doom.

Almost immediately, the Act starts off with a highly dangerous platforming segment over a wide bottomless pit. Once inside, the pitfalls are less abundant, but still plenty. The object gimmicks in this Zone could cause the Act to feel confusing. Because of this, the Act is a bit mazelike. The Act will soon separate into two paths (with minor detours), but will then converge at around the first Checkpoint. The player should be wary of the pitfalls on the lower routes. After two loops and another pushing block, a pair of rotating cylinders will fling the player upwards towards the next section (an extra life is located nearby, likely for the challenges that lie ahead). Past a wall of sand, the route will start to diverge once more (with more dangers than before). Chairlifts are located near the second Checkpoint, as the outside areas return. With the ground separated, the player has to balance themselves on diagonally shifting moving platforms while avoiding the flying Badniks. Some rails may also be present around here. Once again past this area, another inside area awaits, but this time, with a tricky pathway. To proceed into the final outside area, the player must carefully study which path to take while avoiding a wall of crushers and the occasional pitfalls. The true pathway leads the player to a breakable floor, where they can continue onwards to the goal. If playing as Knuckles, he can break a side wall nearby to help avoid most of the confusion and dangers. At the final outside area, more rails, scattered surfaces, springs and diagonally moving platforms are present. The final climb to the top has unstable platforms in a fashion reminiscent of the beginning of this act.

Starts off practically identical to Act 1 with minor alterations. There is an addition of Springs and Rails here. Once inside the first ruins section, the Act will soon split into multiple detours, making it more confusing than the last Act. Hovering Badniks are now more abundant throughout the Act, and will tend to annoy our heroes into falling straight towards their demise. Gimmicks also from the previous Act appear more often in this one (as well as more pitfalls). The Wall crushers from the near end of the Previous Act are now unavoidable here, and must be passed to proceed The first Checkpoint is in a narrow hallway, and leads into the next area. Careful running recommended. Past two more rails, our heroes will come across a new gimmick: a vertical moving block positioned right near the edge of a pitfall with unstable platforms situated above (the pitfall). Now our heroes must carefully jump and avoid being crushed at the same time! There are only two of these gimmick situated, and only in this room. However, to make matters worse, Hovering Badniks also patrol the area to the right of these blocks, first a Buzzer, then a Spinner. Past this area into another inside area, more spinning cylinders will be apparent along the pathways. Now returning outside, this part of the Act is rather short lived before almost immediately returning inside one final time. Near the end, a giant pitfall will be present if our heroes aren't careful with the remaining hazards. Eventually, the pathways converge and lead straight into the final outside area, which is a merely a straightforward path to the goal.

Chaos Angel Act 3 takes place almost entirely outdoors. There is a floating platform bearing Eggman's face that the player must use to ride across a colossal bottomless pit. Falling off is not the only danger, as there are many spike traps, boulders and Buzzers that can potentially knock the player off the platform to their doom. There are three platforms the player must ride in total. The second platform also contains a section where the platform moves up and the player must avoid being crushed into the ceilings. The player does not always have to stay on the platforms for the entire ride. Flying characters could also steer themselves to avoid a few dangers, this is necessary for obtaining a Lost Chao during the second ride. 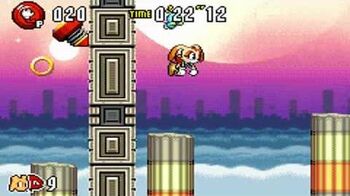 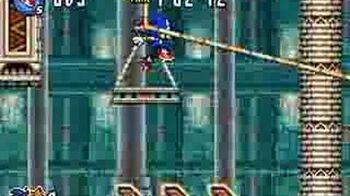 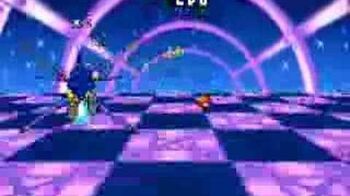