This Chaos has absorbed six of the Chaos Emeralds. With this much power, it is not in the least bit intimidated by Sonic's attacks. It has no qualms about attacking Dr. Robotnik even!

Chaos 6 is a transformation of Chaos. It is the final boss for Big and Knuckles and the fourth boss for Sonic in Sonic Adventure and Sonic Adventure DX: Director's Cut. It is fought on the Egg Carrier.

Chaos 6 is dramatically different from any of Chaos' previous forms. It is no longer humanoid, instead vaguely resembling a bloated scorpion/frog-like creature. Over three times Big's height, it has a massive body with two extensions/antennas on its sides, two pairs of digit-less legs, and a similar pair of large hind legs bending backwards. It has as well a large mouth with razor sharp teeth and two large eyes aligned vertically on its face with three smaller eyes aligned horizontally on each side. It also has a zigzagged tail with a blunt tip. Running through its hind legs are grey bones, connected in the rear by a pelvis-like bone, with a Chaos Emerald embedded in each of them. In its belly lies its bone-covered core, encircled by four standing bones, each with a Chaos Emerald on top.

Unlike its previous forms, Chaos 6 cannot be injured by attacking its head, as the brain is now too deeply situated to be damaged. Chaos' new powers include creating powerful shock waves and trying to inhale enemies to eat them. Chaos 6 is also capable of more advanced shapeshifting that its previous forms, such as turning its body into a container and reshape its body into a pillar with its tail on top to slam enemies with energy while it protrudes several spikes. It can also jump and smash its body into the ground to create huge shockwaves of energy.

The battle takes place above the Egg Carrier's engine on a wide platform. The player must use the Satellites that Dr. Eggman deploys to freeze it and deal damage.

Work with the perimeter of the large area, where there are a few Rings. Don't get close early in the fight. Chaos 6 begins the fight by trying to suck into its maw. Run and jump against the wind until it subsides. To defeat the boss, first attack and deactivate one of the satellites. Pick up a deactivated satellite, then run at the monster and press B button or X button again to throw it. If it strikes Chaos, he freezes. When Chaos is frozen, use the opportunity to attack. Repeat the process four times to win the fight. When the boss emits long tendrils, stay still until the attack almost hits Sonic then dodge. When the tendrils retract, run and jump from the swinging tail.

To defeat Chaos 6 here, freeze it, then crack it while it's defenseless. Glide away from Chaos 6 until its suction subsides. Attack one of the small satellites and pick it up, then run and throw it at Chaos 6. When the monster freezes, attack it quickly. It take four hits to defeat this boss. When Chaos 6 emits long tendrils, stand still until they almost reach Knuckles. When the tendrils retract, jump and glide away to avoid the swinging tail.

When Chaos 6 advances, aim for the small red target inside it to rescue Froggy. Let the monster get close to make aiming easier. Cast beyond the beast so the lure passes through the target. With Big's bull's-eye well past the monster, the lure should hit the mark about halfway up Chaos 6's gelatinous body. 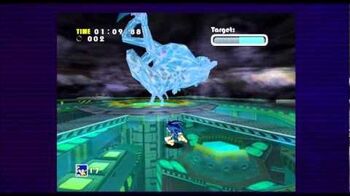 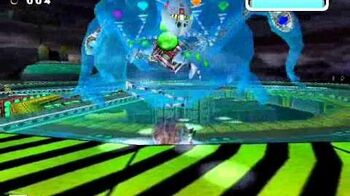 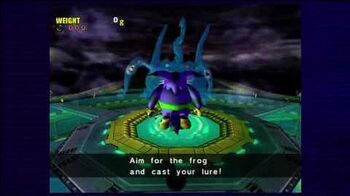 In the Sonic X anime series and its comic series published by Archie Comics, Chaos 6 appeared during the Chaos Saga. After acquiring two Chaos Emeralds on the Egg Carrier, Dr. Eggman used them to turn Chaos 4 into Chaos 6, who swallowed Big, Chris and Froggy in the ensuing skirmish. Fortunately, Sonic and Knuckles showed up and worked together to defeat Chaos 6 and make it revert back to normal, thus saving their friends. 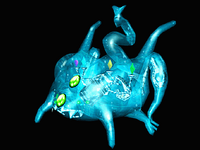