Chaos 4 (カオス 4, Kaosu 4?) is a transformation that appears in the anime series Sonic X. It is the form attained by Chaos after absorbing the negative chaos energy of four Chaos Emeralds.

As Chaos 4, Chaos is more fish-like, differing greatly from its appearance as Chaos 1 and 2. Chaos 4 has a shark-like body with a dorsal fin on its back and a horn on its forehead, and the flaps on the sides on its head have grown longer. It also has two sharp pelvis fins and a pair of arms like Chaos 2's, except its hands look more like fins and lack thumbs. Inside its hands and wrists it has grey bones, each with a Chaos Emerald embedded in them. It also has bones running from its tail fin to its belly where it has a pelvis-like bone holding two Chaos Emeralds.

Chaos 2 transformed into Chaos 4 when two Chaos Emeralds from a battle between Sonic and Dr. Eggman fell into the pond it hid in in Windy Valley. It proceeded to attack Sonic and Tails, making Sonic fight it at its pond. With Chaos 4 in its right element and its increased strength though, it proved too powerful and evasive for Sonic. However, Chaos 4 got knocked out when Sonic used a strong wind to charge at it with a Spin Attack at full speed. Eggman then sucked Chaos 4 up with his Egg Mobile and withdrew.[2]

Chaos 4 later appeared on the Egg Carrier to corner Chris and Big when they tried saving Froggy. There, it was given two more Chaos Emeralds by Eggman and evolved into Chaos 6.[3]

With the power of four Chaos Emeralds at its disposal, Chaos 4's power surpasses that of Chaos 2's. In this state, Chaos' hydrokinetic abilities have been bolstered even further, allowing to conjure up an entire water cyclone.[2] It also has the ability to change water quality.[1] Being made of liquid chaos energy, Chaos 4 is as well nearly indestructible and can mimic the properties of water; if dissipated, it can reconstitute itself again.[2]

Chaos 4 has the ability to discharge energy waves with a swing of its arms, potent enough to sent multiple people flying off their fleet.[2] Its new form also makes it an efficient swimmer who can move quickly through water.[1] On land, it is able to move around by levitating.[3] 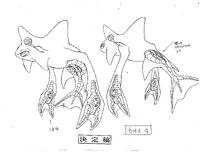 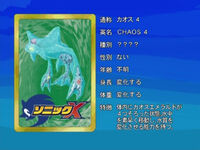