Chaos 2 (カオス 2, Kaosu 2?) is a transformation that appears in the anime series Sonic X. It is the form attained by Chaos after absorbing the negative chaos energy of two Chaos Emeralds.

Chaos 2 looks much like the water humanoid Chaos 0 and Chaos 1, except it is much taller and muscular. It has gained a broader chest, wider shoulders, larger hands and more muscle-toned limbs. It has also gained gray bones in both its arms that travel down its shoulders into its hands where each of the Chaos Emeralds are embedded, and an extra hump on its back above its tail. Its head has as well moved forward and the horns on its back head have move up on the sides of its head to give it a hammerhead-style look.

When Sonic and Knuckles joined up against Chaos 1, Dr. Eggman fed it another Chaos Emerald, turning it into Chaos 2. Sonic and Knuckles tried their hardest to fight Chaos 2, but its force-field kept them from dealing noticeable damage until Knuckles managed to disrupt it, thus allowing Sonic to take Chaos 2 down. Afterwards, Eggman sucked Chaos 2 into his Egg Mobile and flied away.[1] Chaos 2 soon after evolved into Chaos 4 when it went to Windy Valley and took the Chaos Emeralds that Sonic and Tails had found.[2]

As Chaos 2, Chaos' attack and defense are much greater than when it was Chaos 0.[3] Most noticeably, it took the combined power of both Sonic and Knuckles to beat it.[1]

Chaos 2 possesses incredible super strength which has only been heightened following its transformation, and its hydrokinetic abilities have been enhanced as well; it can spray high pressured water from its palms which can cleave a building in half. Also, being made of liquid chaos energy, Chaos 2 is nearly indestructible and can mimic the properties of water; if dissipated, it can reconstitute itself again. Additionally, it can create a near-unbreakable shield with electrical properties which will electrocute those that touch it.[1] 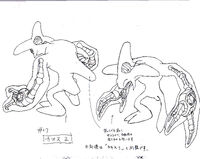