Chaos 2 is a form attained by Chaos and serves as a boss in Sonic Adventure and its remake Sonic Adventure DX: Director's Cut. It is achieved after absorbing the negative energy of two Chaos Emeralds.

Chaos 2 looks much like the water humanoid Chaos 0 and Chaos 1, except it is much taller and muscular. It has gained a broader chest, wider shoulders, larger hands and more muscle-toned limbs. It has also gained gray bones in both its arms that travel down its shoulders into its hands where each of the Chaos Emeralds are embedded. Its head has as well moved forward and the horns on its back head have move up on the sides of its head to give it a hammerhead-style look.

Because of the two Chaos Emeralds empowering it, Chaos' hydrokinesis is enhanced to the point that it can produce water over a huge area. Its strength is also increased, giving it more powerful punches and extendable limbs (though stretching renders it vulnerable).

For defense, Chaos 2 can generate an energy shield that cannot be bypassed. It can also shapeshift to assume forms like a giant ball. In some occasions, Chaos 2 can separate itself into several sphere projectiles that home into opponent, with its brain enveloped in a red aura for a short time afloat in mid-air, as another way to attack. In addition to that, Chaos 2 still retains the high jumping capability that it uses should an enemy be near of it.

To start the boss battle with Chaos 2 using Knuckles the Echidna, the player has to enter the Hotel Restaurant in Station Square.

In battle, Chaos cannot be attacked, until he begins to first, as he will use an energy shield whenever he is challenged. When he attacks, aim for a punch at him, rendering him to his water form until he returns. If he takes as a sphere form, jump at it, to make him leave this form to attack. After dealing three damages, he will consume the arena with water, glide to bypass this type of harmful water, until he returns back. And when he attacks once again, finish him.

Another way to defeat Chaos 2, is to attack it immediately after the player kicks it in its spherical form while it is reforming.

In the Sonic the Hedgehog comic series and its spin-offs published by Archie Comics, Chaos 2 appeared during the series' Sonic Adventure adaptation. During a battle with Sonic and Knuckles, Chaos received two Master Emerald shards from Dr. Eggman that let it transform into Chaos 2. It soon after transformed into Chaos 4 when Eggman fed it two additional Master Emerald shards.

In the anime series Sonic X, Chaos 2 appeared during the Chaos Saga. When Chaos 1 was confronted by Sonic and Knuckles, Dr. Eggman turned it into Chaos 2. While it still lost to the heroes, Eggman was able to get away with Chaos 2 and later turn it into Chaos 4. 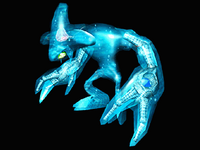