Chao World is a location that appears in Sonic Adventure 2 and its ports. According to the world map, it is located outside of Central City.

In Chao World, players raise virtual pets, called Chao. The island has three chao gardens for Dark Chao, Neutral Chao, and Hero Chao. There are also other places, such as the Chao lobby, a cave where karate matches and Chao races are held, found in the Neutral Chao Garden, and the Chao Kindergarten, where Chao can be taught arts and crafts. The Chao Kindergarten is also where you name your Chao (Fortune Teller), check its stats (Doctor's Office), and buy hats and special fruit for your Chao, in the Black Market, with rings you've collected from Action Stages (Battle only). 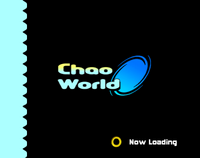