A battle in Chao Ruins.

A set of ruins located at Holy Summit.

Chao Ruins is a fighting arena in Sonic Battle. Here, the player can find Knuckles the Echidna in Story Mode.

This arena is located at Holy Summit. The arena has small open areas with ancient stone pillars located in the corners and sticking out into the middle. These stone pillars also have some sort of Chao hieroglyphics on the sides of them.

After discovering that Emerl is powered by Chaos Emeralds, Sonic the Hedgehog and Miles "Tails" Prower take the robot to Knuckles the Echidna in Holy Summit, hoping that he'll assist them in obtaining more emeralds. After a fight with an E-102 Gamma lookalike, the trio visits Knuckles' home, where the echidna proceeds to attack Emerl due to mistaking him for E-121 Phi. Upon recognizing his mistake, he instead decides to help his friends out.

Tails and Emerl flee to Holy Summit in order to escape the Guard Robos searching for them in Central City. The two of them soon run into Knuckles, who battles Emerl after Emerl refuses to listen to him. After the battle, the three of them begin to travel to Emerald Town, but are ambushed by Chaos Gamma. Knuckles fends off the robot while Tails and Emerl escape back to the town.

Once Emerl is fully awakened, Shadow asks him to fight everyone before the two duel again. 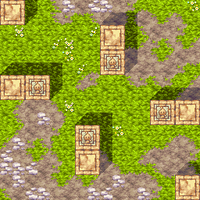 Chao Ruins map
Add a photo to this gallery