Not to be confused with the in-universe fictional series, Chao in Space.

Chao In Space is a one-shot animated web episode that first aired on the official Sonic the Hedgehog YouTube Channel on 12 December 2019.[1][2] It is based off of the fictional in-universe Chao in Space and acts as a Holiday special for 2019.

Brace for impact as forces collide in “Chao In Space”! Don’t worry – you’re (probably) not dreaming. Inspired by the posters originally found in the Sonic Adventure series, the epic space saga finally comes to life as a beautiful short animation, almost 20 years later. It’s our little gift to you, and we hope you like it. From all of us at SEGA – Happy Holidays![1]

This sequence is revealed to be a dream. In reality, a Neutral Chao is taking a nap under a tree with Sonic in the Neutral Garden but is showing signs of distress that the hedgehog takes notice to. In the dream, the two Chao clash several times which results in part of the Neutral Chao's spaceship to get damaged. The dreaming Chao is soon annoyed enough to stand up and start walking towards the garden pool. Sonic quickly guides it away from it, only for the Chao to instead trip over. Back in the dream, the Neutral Chao is disheartened after its ship had been wrecked. However, as it looks at a picture of it graduating with its two other Neutral Chao friends, the Neutral Chao finds its determination again and drives off once more. In reality, the Neutral Chao is climbing the small mountains which Sonic quickly notices. He attempts to save the Chao but it flies away at the last minute, leaving him to fall into the pool. As two Chao look at the slightly annoyed hedgehog, a Penguin swims over to hug Sonic.

In the dream, the two Chao shoot at each other and clash once again. Back in reality, Sonic is busy chasing the Neutral Chao as the other Chao in the garden watch them. As everyone else is distracted, Dr. Eggman, dressed as Santa Claus, arrives in the garden and plots to steal the garden's presents. Soon, Sonic sees the Neutral Chao flop onto the ground with a sad mood. In the dream, the Dark Chao managed to destroy the Neutral Chao's spaceship and turns to fly off. As the Chao floats helplessly in space, its friends from graduation fly in via hyperspace by his side. They provide the Neutral Chao with seven Chaos Drives that makes it enter a cocoon and enter a Super State. The Dark Chao turns around to see the phenomenon and is initially not impressed, but after a Penguin flies in and grants the Neutral Chao thick eyebrows, it becomes intimidated. The super-powered Chao then flies directly at its foe. In reality, the Neutral Chao sleepily runs with its arm extended. Sonic lifts his leg to let the Chao continue its route peacefully. The Chao unknowingly runs before the thieving Eggman and punches him in the face, just as his dream self blasts through the Dark Chao's ship.

Sonic quickly catches the Chao before it can fall off the cliff and looks over to see Eggman helplessly falling. Sonic is initially confused by the event but smiles and cradles the sleeping Chao. In the dream, the Neutral Chao is celebrating its victory with its friends and is about to open a bottle of Chao Soda. Before it does, it spots the spirit of Tikal clapping for it, which brings tears of joy to its eyes. The Chao then turns back to its bottle, trying to take the cork off. In reality, the Chao is actually pulling Sonic's nose. Despite this, the Chao manages to get the cork off, much to Sonic's dismay.

Shortly after the episode's release, promotional merchandise was available from Sega Shop, including an exclusive tee of Sonic and the Neutral Chao napping under a palm tree, a mug of all the Chao designs used in the short and a poster based on Chao in Space.

Chao In Space was selected by to participate in the 24th annual LA Shorts International Film Festival event.[3] 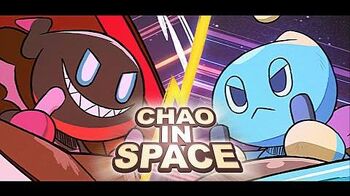 Sonic the Hedgehog in other media
Español
Community content is available under CC-BY-SA unless otherwise noted.
Advertisement