A colony of Chao

The Chao (チャオ, Chao?) are creatures that appear in the anime series Sonic X and its comic series published by Archie Comics. They are a mysterious species that dwells in isolated locations. These creatures can be found on both Earth and Sonic's world.

The Chao are small, light blue creatures with pudding-like bodies. While their exact height and weight is not pinpointed,[1] they are generally about 40 centimeters tall.[2] They have round waterdrop-like heads with blue eyes but no nose, round torsos smaller than their heads, smooth feet with no legs, and arms with no visible hands. Neither their arms or feet have digits. They also have yellow tips on their arms, feet and head, a short round tail, small pink wings and a floating dot over their heads.

Chao are cute and lovable creatures akin to human infants and their mannerisms are pleasant and relaxing. They are very peaceful and friendly, and usually spend their existence eating, sleeping, and playing. The Chao on Earth are not instinctively afraid of humans due to their limited interaction with them.[3] Chao can also become attached to individuals, as evidenced by the friendship between Cream and her Chao, Cheese.

As seen so far, wild Chao diets consist of tree fruits,[3] although they can just as easily consume homemade cooking. Chao can also only speak one word which is their own species' name, although it seems to comprise an entire language.[4]

All Chao are capable of flight. In some cases, they may even possess incredible power, like Cheese, who could land a devastating punch on Metarex Kingape.[5] Apparently, Chao also have the ability to hear certain radio signals.[6]

Generations ago, a Chao colony lived at the Master Emerald and Chaos Emeralds' shrine in the Mystic Ruins where they were protected by their guardian, Chaos. During the Knuckles Clan's war efforts, the Chao and Chaos befriended chief Pachacamac's daughter Tikal, who in turn tried to protect the Chao from her father's plans to raid their shrine for the Emeralds. Finally, when Pachacamac and his warriors attacked the shrine, many of the Chao got hurt. This enraged Chaos, who wiped out the Knuckles Clan in his fury before Tikal sealed Chaos in the Master Emerald.[7][8][9][10]

Around the present day, the Chao habitats began dwindling on Sonic's world, so measures were taken to protect the remaining Chao colonies.[3] On Earth, Mr. Tanaka discovered a Chao colony near his hometown during his childhood and would often visit the Chao there.[3] Cream the Rabbit eventually befriended a Chao she named Cheese, who became her constant companion.

While on vacation, Chris, Frances, Danny, Tails and Cream discovered Mr. Tanaka's childhood Chao colony and befriended the Chao there. However, their water pond would get muddied up by Dr. Eggman. As Chris and his friends tried cleaning the Chao's water, Sonic arrived and cleaned it for them.[11]

When Chaos began running rampant on Earth, the Chao that Chaos had protected appeared on Earth where they watched the events involving Perfect Chaos unfold. After Super Sonic beat Chaos and calmed its rage, the Chao reunited with their old friend, much to Chaos' joy, who returned to the Master Emerald with Tikal to live in peace.[9][10]

According to Cream the Rabbit, lots of people on Sonic's world have taken up Chao as pets.[4]

When Perfect Chaos attacked Station Square, several Chao came through the Master Emerald to Earth to help stop Chaos. Once the threat had passed and Chaos resumed being the Chao's protector, they all returned to the Master Emerald. While Cheese was offered to join its friends, it chose to stay with Cream.[4]

During a brief kidnapping of Cheese, Dr. Eggman acquired its DNA which he used to cultivate his own breed of Chao which turned into dangerous Dark Chao when exposed to a certain radio signal. He then seeded these Chao into Station Square by selling them as pets before making them ravage the city to make the population submit to him. However, Cheese noticed these Chao were different, alerting Sonic and his allies to this threat.[4][12] As the heroes were overrun by the Dark Chao, Tikal, who had heard the Dark Chao's distress, came with an army of Chao who held the Dark Chao off until Sonic and his allies could convert them to normal Chao. Tikal then took all the Chao, except for Cheese, back to the Master Emerald.[6] 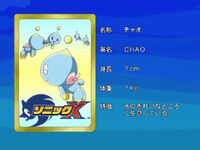