A Chainspike, from Sonic & Knuckles.

Chainspike[1] (クロウ[2], Kurō?, lit. "Crow") is an enemy that appears in the Sonic the Hedgehog series. It is a mass-produced Badnik model created by Dr. Robotnik that guarded the insides of the Death Egg during the climax of the second part of the Angel Island incident.

The Chainspikes have a round, cyan body with a spike spear on their top, bottom and side sections. They also have a glowing eye in the center of a black cross-line on their body.

In Sonic & Knuckles, and the lock-on game Sonic the Hedgehog 3 & Knuckles, the Chainspikes appear in Death Egg Zone where they initially hover in a stationary position at corridor and ramp sections. However, they will rapidly zip to the other side of said sections as the playable character gets close, before extending one of their spike spears in a certain direction. After that, they will repeat their pattern. When a Chainspike is about to perform its pattern, its eye glows three times.

The safest way to defeat a Chainspike is to perform the Insta-Shield as Sonic. It is also possible to destroy it by hitting one of its "corners" with a well-timed Spin Jump when it releases its spike spears. 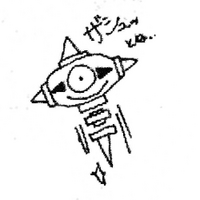