Shadow in Central City, from Shadow the Hedgehog.

Hey, it's Shadow! Good timing. The Black Creatures have huge bombs that they're trying to set off in the city! We only have a few minutes before the bombs detonate and destroy the city! You've got to help us!

— Knuckles the Echidna, Shadow the Hedgehog

Central City is one of the fourth Stages in Shadow the Hedgehog. It is accessed only by completing the Dark mission of Cryptic Castle.

The first of the "Pure Dark" levels, Central City is only accessible by taking the evil route in Cryptic Castle (which involves fighting against the Black Arms by helping Eggman defend his fortress). Nevertheless, Shadow's general behavior up to now seems to have satisfied Black Doom as to his loyalties. Before the level begins, the alien leader tells Shadow that his past is "filled with hatred and contempt for the humans," and that he should take revenge on them with his own two hands. To this end, the hedgehog is told to detonate five giant bombs which the Arms have set around the city, which G.U.N. is struggling to secure long enough to have their bomb squads defuse before they are detonated.

Standing in the Arms' way is also Knuckles the Echidna, helping out the human defenders as he did in Glyphic Canyon. Knuckles asks Shadow to help in defusing twenty smaller bombs, which can be accomplished by grabbing a vacuum gun (or Egg Vacuum from a special crate) and sucking the devices up harmlessly. It is unknown if the events that are associated with Central City took place or not. The President has received a call from the Secretary that the Black Arms are invading Central City. The next scene shows Shadow with the Black Arms aliens behind him. Black Doom proceeds to tell him that the humans took their revenge on him and now he must punish them. Afterward you proceed through the level and get ready to do either the hero or dark mission. If the player does Knuckles' hero mission, the city will be saved, but if they do Black Doom's mission, the city will be destroyed. If the player takes too long on Black Doom's side, the larger bombs will go lifeless thus botching the mission.

The following weapons can be found in Central City:

Behind the Secret Door is an Air Saucer, which is used to cross the toxic liquid.

Attack each bomb to detonate it. The first bomb is close to the first Save Point. The second is after a Triangle Jumping area on the roof. The third is in a cage close to the third Save Point. The fourth is locked in a cage in the toxic waste area. After getting past the toxic waste area, destroy some nearby debris to reveal a spring. Jump on the spring and the bomb will be in a cage. Each cage can be opened by defeating the nearby GUN troops. Some of the bombs can be destroyed with Chaos Blast.

The Vacuum Pod weapon is the only way to properly dispose of the small bombs. Shortly past where Knuckles is met with is a Black Arms soldier that holds this weapon. The small bombs are found along the lower portion of the Stage.

The object of Central City's Expert Mode is not to find the Goal Ring, but to destroy the five giant bombs found throughout the city. To compensate for this, the Stage is made more linear by walling off several areas and paths to make it clearer where the player has to go. Most of the bombs are located in the same places as the Normal Story Mode, except for the second one which has been moved to the end of the Stage. There is no time limit in this version of the Stage. 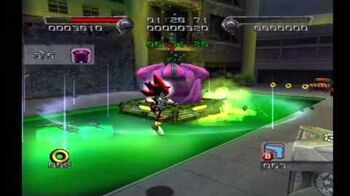 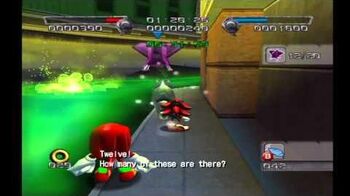 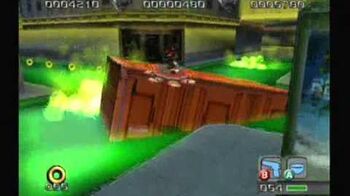