Sonic and Tails facing the Egg Claw, from Sonic the Hedgehog 2.

Catch Eggman[1] (キャッチャーエッグマン[2], Kyatchā Egguman?, lit. "Catcher Eggman"), also known as the Egg Claw,[3] is an object that appears in the Sonic the Hedgehog series. It is a modified Egg Mobile created by Dr. Eggman, who first used it during the West Side Island incident.

Catch Eggman is similar to a stylish-ed Egg Mobile with number of flashing, colorful details on it. It also seems to be shaped like an UFO. It has yellow leg-like claws on the bottom, and multiple colors in the form of red, blue, yellow, and gray on the top and middle.

During the first part of the Death Egg mk.II incident, Catch Eggman was slightly modified to be slightly wider. Also, the flashing lights on the Egg Mobile's middle part have been removed and replaced with crimson-colored plaques.

Catch Eggman is capable of flight. Its claws can also produce electricity and drop explosive iron balls. In addition, during the first part of the Death Egg mk.II incident, it could protect itself with a round shield, albeit only for a short time.

Sonic and Tails facing the Egg Claw, from Sonic the Hedgehog 2.

A modification of Eggman's Mobile with yellow leg-like claws on the bottom, which not only are electrocuted, but can catch the player. It has to be hit eight times to be destroyed.

Dr. Eggman's Egg Claw drops explosives and lures you in with an electric field over his weak spot in this giant pinball field.

The battle takes place in an enclosed area with two sets of pinball flippers and single triangle in the middle. The player is able to move normally on by using ramps to move above pinball sections by using Spin Attack or doing Spin Dash to gain more speed. Above, there are various Bumpers, which the player can use to balance on. When the player arrives to the arena, the enter route will be closed down for the boss fight.

Like the other bosses in Sonic the Hedgehog 2, the Egg Claw takes eight hits to be defeated. After this, Dr. Robotnik turns to flee from the scene while the player can get out the pinball arena and open the Capsule on the right pathway, thus ending the Zone.

Sonic encountering Catch Eggman, from Sonic the Hedgehog 4: Episode I.

The return of the fancy-looking Egg Mobile with yellow claws, which is also able to do new, dangerous attack, that can make it spin around the pinball arena. The player has to hit it eight times to defeat it.

The doctor trots out his mecha from Sonic The Hedgehog 2's Casino Night Zone.

Catch Eggman makes another appearance in Sonic the Hedgehog 4: Episode I as the boss in Casino Street Zone. Once again, it is piloted by Dr. Eggman. Like in Sonic the Hedgehog 2, it takes place on pinball arena, that has slightly differently placed gimmicks now with only two flippers. The boss battle is also slightly different, as Eggman is able now to catch Sonic by firing the yellow claw-add on to him instead of landing to the ground with Egg Mobile. Eggman can also grab Sonic and let go of him above three sets of spikes, which are hidden in the center bottom of pinball arena.

After four hits, Catch Eggman will perform a new attack, that allows Dr. Eggman to put a shield on top of him and his mech and then he will spin around the screen and when shielded, contact with the mech will damage the player. The player can hit after Catch Eggman is on its regular form. After another four hits, Eggman gets defeated and flies away, while the player is able to get out the arena and open the capsule, thus ending the Zone.

Catch Eggman later returns in E.G.G. Station Zone, as part of the boss rush of the Zone before the final boss. After doing one hit, it will then activate a new attack, in which it charges with dangerous electricity spins out of control and the player must dodge. It will take four hits to defeat it again. 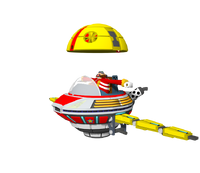